(03.01.2012) The prevalence of acid reflux experienced at least once a week has increased by almost 50%  over the past decade, NTNU researchers report in a long term study of almost 80,000 people published online in Gut.

Women seem to be more vulnerable to developing the condition than men, the figures show.

Acid reflux is associated with an increased risk of gullet (oesophageal) cancer, which is difficult to treat successfully and rates of which have been rising rapidly in developed countries.

All the participants were part of the Norwegian Nord-Trøndelag Health Study, which draws on regular health surveys of a representative sample of the population.

The increases were seen in both men and women and across all age groups, although the rise in the most severe symptoms occurred mainly in the middle aged.

Medicine for severe symptoms
Almost all (98%) of those with severe acid reflux experienced symptoms and/or used medication to treat them at least once a week, compared with around one in three (31%) of those with mild symptoms.

The average annual incidence of any and severe acid reflux symptoms was just over 3% and 0.23%, respectively.

Acid reflux symptoms can spontaneously disappear without the aid of medication, but during the study period this happened to just over 2% of those with symptoms each year.

Younger women and resolution of symptoms
Women under 40 were the most likely to find that their symptoms resolved of their own accord. And while this possibility diminished with age in both sexes, it was most evident among women.

The use of anti-reflux medication, or pregnancy, when acid reflux often occurs, could not explain these patterns.

The rise in prevalence of acid reflux may be partly explained by increasing rates of overweight and obesity, which are known risk factors for the condition, while the patterns seen in women might be down to the use of hormone replacement therapy, suggest the authors.

But they warn: "The increasing prevalence of [acid reflux] is alarming, because it will most likely contribute to the increasing incidence of adenocarcinoma of the oesophagus in the western population." 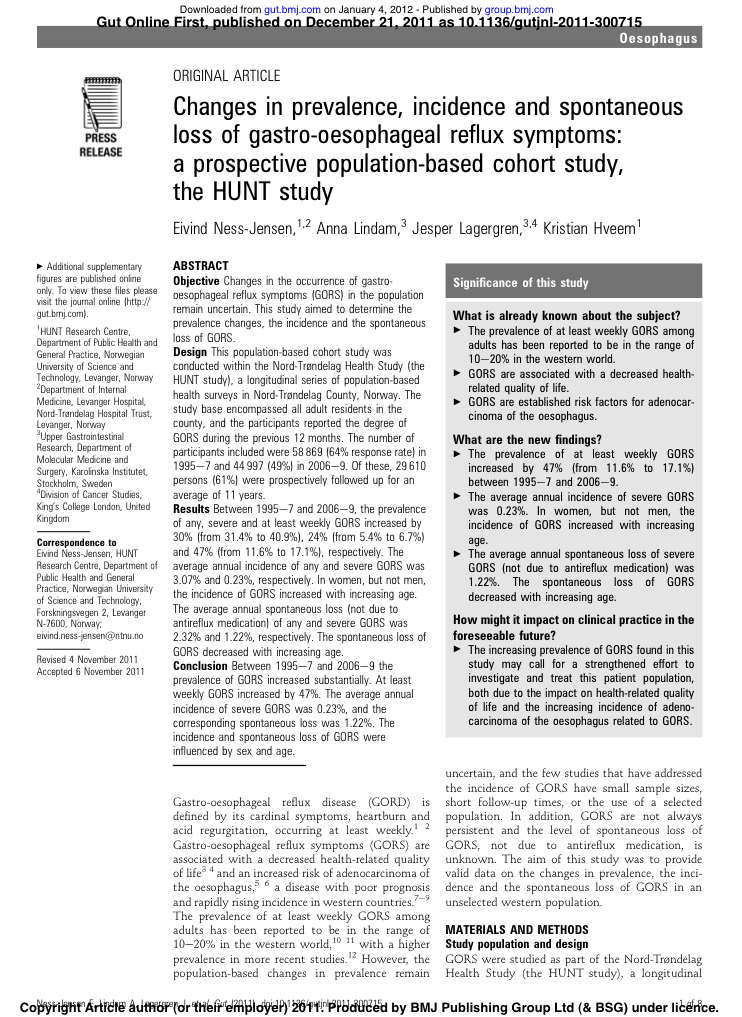 The Nord-Trøndelag health study (HUNT) is one of the largest health studies ever undertaken. It is comprised of a unique database of personal and family medical histories that were collected during three intensive studies, along with biological samples from more than 75,000 individuals. Today, HUNT is a database with information about approximately 120,000 individuals, where family data and individual data can be linked to national health registries.

HUNT includes an associated biobank that stores whole blood and DNA from 200,000 individuals, serum and plasma samples from more than 100,000 individuals, along with RNA tubes, cells, buffy coat, urine and na-heparin tubes for roughly 50,000 people. For more information, visit the HUNT home page.