(18.07.2012) The word rainforest usually conjures up visions of brightly coloured birds and hyperactive monkeys swooping through a thick green canopy of leaves, vines and flowers.  But rainforests are also found closer to the poles, in the northern or boreal region where temperatures are far cooler. And while there are no monkeys swinging through the trees here, these forests are every bit as endangered as their southern cousins, and highly diverse – if you know where to look.

Olga Hilmo knows. As a biologist and researcher at the Norwegian University of Science and Technology (NTNU), she has made it her business to better understand the treasure trove of genetic diversity that is protected in the tiny fragments of boreal rainforests that still remain.  The key, she says, is realizing that this fantastic diversity is hidden in plain sight, in the organisms that drape tree branches in long tendrils of green or grow on bark and rocks in crusty or leafy patches of green or grey.

These organisms, called lichens, are actually two or more species living together in a symbiotic relationship, where a fungus provides the structure and an alga provides nutrients. In a study just published in Molecular Genetics, Hilmo and her colleagues from NTNU's Museum of Natural History and Archaeology and the Nord-Trøndelag University College report extremely high genetic diversity for individuals of one lichen species, Lobaria pulmonaria, that grow on the same tree.

Hilmo and her colleagues' findings are important because they show that genetic diversity can persist, even if the species in question is found only in tiny fragments of once plentiful habitat, like northern rainforests.

Surprising results
Lobaria pulmonaria grows to about the size and shape of a crinkly green leaf and is found throughout Europe, Asia, North America and Africa in coastal areas with high rainfall. However, it is in decline and is considered an endangered species in many parts of Europe. 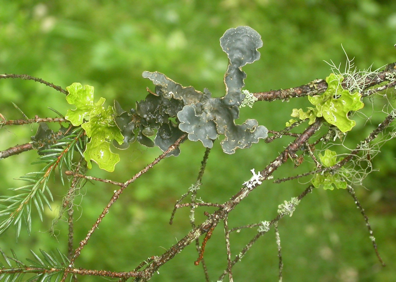 The lichen most often reproduces vegetatively, which means that it spreads via small fragments. Each fragment, if it blows or falls to a favourable spot, is capable of starting a new plant that is genetically identical to the "mother" plant that it came from.  However, these little fragments, about the size of a coarse sugar grain, are relatively heavy, so you wouldn't expect them to spread very far.

That's why you would expect the lichens growing on the same tree to be genetically the same, or at least very similar – but they are not. That means that populations of Lobaria are either extremely old or that in some way or another the species is very good at spreading, Hilmo says.

Even though these fragments of boreal rainforest may be somewhat far apart, there is clearly some kind of connection between them that enables Lobaria to share genetic material with its neighbors. "This is important in enabling populations of Lobaria to keep their genetic diversity and remain healthy," Hilmo says

Logging OK – but islands need protecting
Hilmo's findings matter because they provide us new information about a globally threated species that has somehow managed to survive in what's left of Norway's boreal rainforests.  These rainforests are like small islands in a sea of tree plantations and harvested areas, with plantation trees cut every 70-80 years.

Less than 1 % of the productive forest area in Namdalen, an area in central Norway with some of the world's most northerly boreal rainforests, is still home to this rare habitat.  Here, annual precipitation can top 1350 mm per year, and it rains on average about 230 days of the year. As a result, humidities are always very high and the forest canopy rarely dries out – making for a wholly unique habitat for humidity loving species such as Lobaria.

In spite of the favourable growing conditions, there are essentially no untouched boreal rainforests in Norway, Hilmo says.  And changes in logging practices in Norway after WWII have reduced the area covered by natural boreal rainforests, she says.  "All these forests are affected by logging in one way or another. Before WWII there was selective logging, but after WWII they went to clear-cutting. Most natural stands have been left in ravines where it is too hard to log," she says.

33 fragments already protected
The good news is that species like Lobaria have managed to maintain high genetic diversity in these small fragments, and that logging around them does not appear to be having a negative effect on the rainforest fragments. Because of this, Hilmo and her colleagues hope that foresters and loggers in Norway can find ways to protect these remaining bits of forest, which are important reservoirs of diversity. 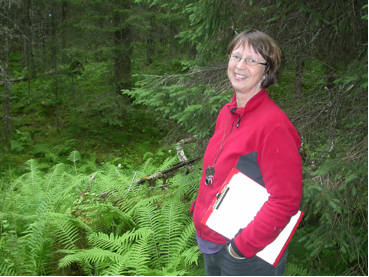 She also hopes that there will be more funding in the future to further explore the diversity of Norway's rainforests.  "We need to know a lot more about the species that grow in these forests, particularly rare species such as Lobaria," she says.  "If we want to establish targeted measures to protect these species, we need to know much more about them, both in terms of their ecology and population biology."

Local and regional authorities have recognized the value of the remaining forests, and 33 fragments have already been protected on a regional basis. Additionally, landowners who want to log in natural boreal rainforests must report their plans to the authorities, she says. Nevertheless, the more that people understand that there are these special forest fragments in central Norway, the better, she adds.

"These forests are fantastic," she says. "There are moss-covered logs all over the ground, and lichens draping tree trunks and branches, and pendulous lichens hanging down from the trees. It's fascinating and beautiful. Everyone should get to experience being in a rainforest like this, especially in the rain." 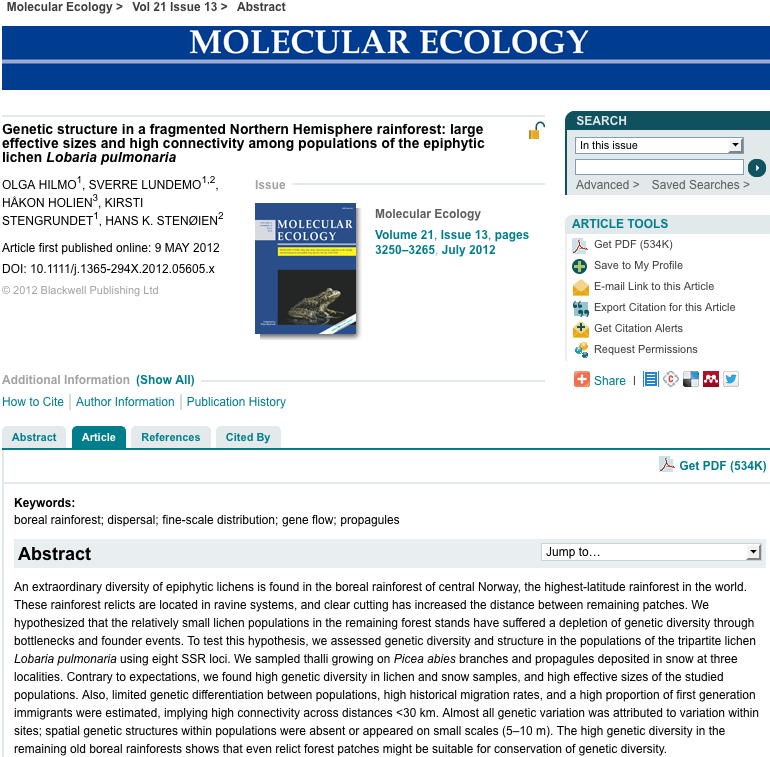