LSD could be used to treat alcoholism

In the 1950s, ‘60s and ‘70s, researchers in many places in the world experimented with LSD in the treatment of various disorders, including alcoholism. Not all experiments were scientifically tenable by today's standards, but some were. Now Teri Krebs and Pål-Ørjan Johansen, researchers at the Norwegian University of Science and Technology (NTNU), have taken a closer look at these experiments. Their results are being published in the Journal of Psychopharmacology.

The results of all of the studies the pair examined pointed in the same direction, which Krebs and Johansen say is quite clear: A single dose of LSD, provided for treatment purposes, helped heavy alcoholics and made it less likely that they would relapse.

"There has long been a need for better treatments for addiction. We think it is time to look at the use of psychedelics in treating various conditions," the researchers say.

536 alcoholics
The Norwegian researchers found six different studies of LSD and alcoholism that were scientifically sound, in which patients were randomly assigned, as if by tossing a coin, to receive either LSD or a comparison treatment. They combined all the data from these studies, involving a total of 536 people – the first such rigorous quantitative analysis in the world.

All of the studies were conducted either in the U.S. or Canada between 1966 and 1970. The studies all involved individuals who were admitted to treatment for alcoholism and who voluntarily participated in the trials. Nearly all were men.

Within each of the studies all patients were given the same treatment programme. But on one treatment day some patients were given a single large dose of LSD, while control patients received a low dose of LSD or a stimulant drug - or nothing. In some studies, during the duration of the drug effects, patients talked with a therapist, while in other studies, patients received only brief reassurance if they wanted. But all were encouraged to reflect on their alcohol problem.

Neither patients nor the individuals who were treating them knew in advance who would get a full dose of LSD.

Clear improvements - greater opportunities
"In independent and standardized follow-up examinations, ranging from one to twelve months later, all of the studies showed that the patients who had received a full dose of LSD fared the best. On average, 59 per cent of full-dose patients showed a clear improvement compared with 38 per cent in the other groups," say Krebs and Johansen.

LSD patients were less likely to relapse into problematic alcohol use and had higher levels of total abstinence. In some studies their relatives also reported the same findings. Many of the patients said they had gained a new appreciation for their alcohol problem and new motivation to address it.

These patients also reported greater self-acceptance and openness, as well as greater faith in their ability to deal with future problems.

Affects the brain
"We do not yet fully know why LSD works this way," the researchers admit. "But we know that the substance is non-toxic and that it is not addictive. We also know that it has a striking effect on imagination, perception and memories."

The researchers explain that LSD interacts with a specific type of serotonin receptor in the brain.

"LSD may stimulate the formation of new connections and patterns, and generally seems to open an individual to an awareness of new perspectives and opportunities for action," they say.

Not followed up
By 1971 LSD had been banned for non-medical use, and although the drug was and is still permitted as an experimental  medical treatment, it became increasingly difficult to conduct clinical trials. Despite the promising studies, LSD was claimed to have no demonstrated medical use. There may be several reasons for this, the researchers explained.

"The earliest studies reported promising results but also had methodological problems. Many scientists expected unrealistically good results from a single dose, and tended to ignore effects that lasted less than a year. Importantly, many of the individual studies did not have enough patients to reach a conclusion by themselves."

"But when we combine studies that had sound methodology, the results are unambiguous. We can therefore safely conclude that a single dose of LSD had a positive treatment effect that lasted at least six months," Krebs and Johansen said.

Should offer repeated doses
The improvement was greatest during the first few months of treatment. As the months passed, the effect gradually decreased.

"It is unusual for psychiatric drugs to have an effect that lasts for several months after a single dose. We now better understand that alcoholism is a chronic, relapsing disorder that typically requires ongoing treatment. The next step should be to periodically provide additional doses of LSD in combination with modern evidence-based treatment programs," the researchers conclude.

The meta-analysis is being published in the Journal of Psychopharmacology.

The work was financed by the Research Council of Norway and conducted during a research stay at Harvard Medical School. Krebs and Johansen are currently affiliated with the Department of Neuroscience at NTNU. 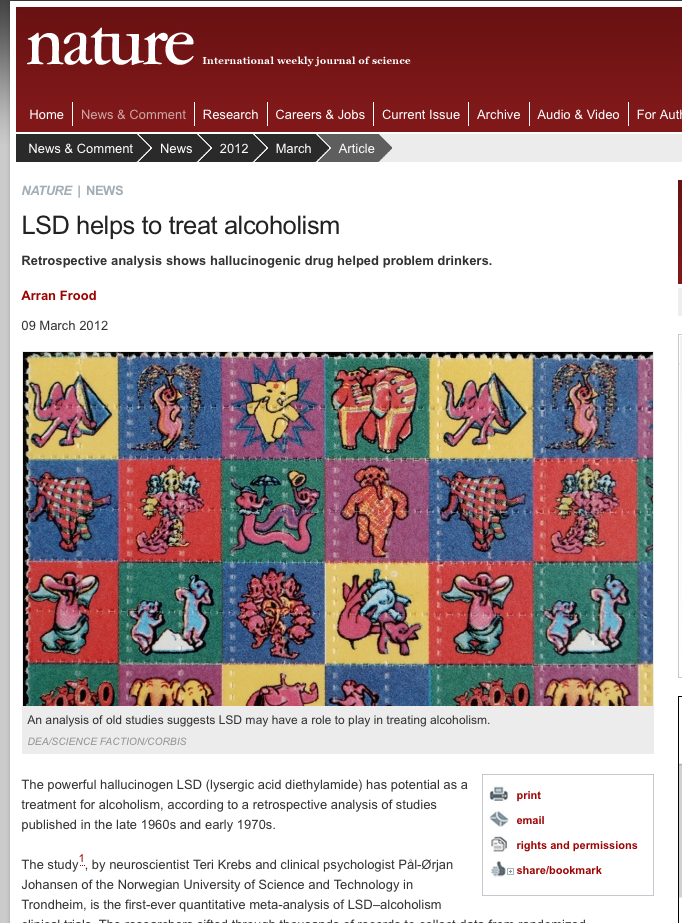 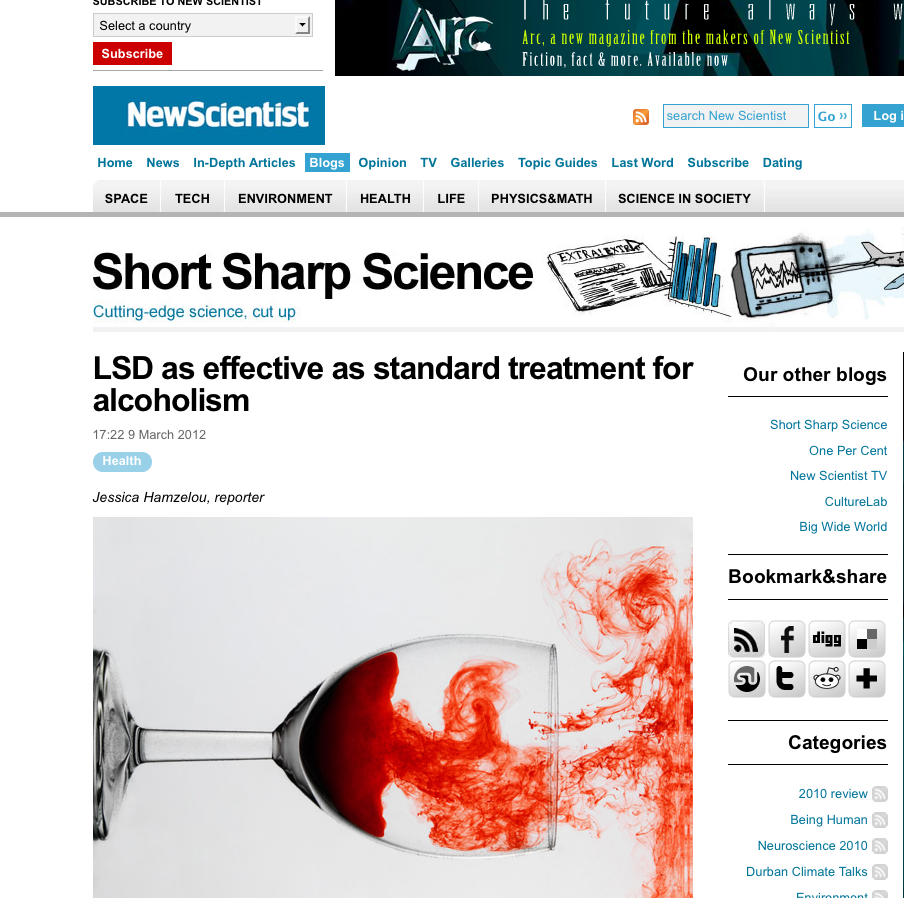 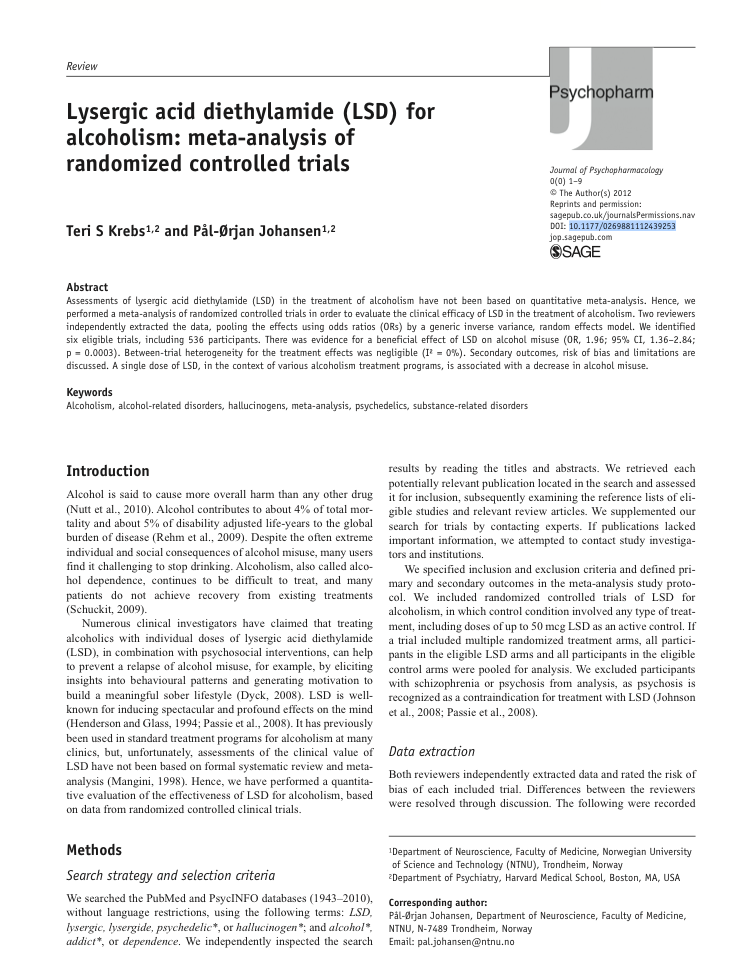