The many maps of the brain

The many maps of the brain

(05.12.2012)  Your brain has at least four different senses of location – and perhaps as many as 10. And each is different, according to new research from the Kavli Institute for Systems Neuroscience, at the Norwegian University of Science and Technology.

The findings, published in the 6 December 2012 issue of Nature, show that rather than just a single sense of location, the brain has a number of "modules" dedicated to self-location. Each module contains its own internal GPS-like mapping system that keeps track of movement, and has other characteristics that also distinguishes one from another.

"We have at least four senses of location," says Edvard Moser, director of the Kavli Institute.  "Each has its own scale for representing the external environment, ranging from very fine to very coarse. The different modules react differently to changes in the environment. Some may scale the brain's inner map to the surroundings, others do not. And they operate independently of each other in several ways."

This is also the first time that researchers have been able to show that a part of the brain that does not directly respond to sensory input, called the association cortex, is organized into modules. The research was conducted using rats.

Technical breakthroughs
A rat's brain is the size of a grape, while the area that keeps track of the sense of location and memory is comparable in size to a small grape seed. This tiny area holds millions of nerve cells.

A research team of six people worked for more than four years to acquire extensive electrophysiological measurements in this seed-sized region of the brain. New measurement techniques and a technical breakthrough made it possible for Hanne Stensola and her colleagues to measure the activity in as many as 186 grid cells of the same rat brain. A grid cell is a specialized cell named for its characteristic of creating hexagonal grids in the brain's mental map of its surroundings.

"We knew that the ‘grid maps' in this area of the brain had resolutions covering different scales, but we did not know how independent the scales were of each other," Stensola said. "We then discovered that the maps were organized in four to five modules with different scales, and that each of these modules reacted slightly differently to changes in their environment. This independence can be used by the brain to create new combinations - many combinations - which is a very useful tool for memory formation."

After analysing the activity of nearly 1000 grid cells, researchers were able to conclude that the brain has not just one way of making an internal map of its location, but several.

Perhaps 10 different senses of location
Institute director Moser says that while researchers are able to state with confidence that there are at least four different location modules, and have seen clear evidence of a fifth, there may be as many as 10 different modules.

He says, however, that researchers need to conduct more measurements before they will have covered the entire grid-cell area. "At this point we have measured less than half of the area," he says.

Aside from the time and challenges involved in making these kinds of measurements, there is another good reason why researchers have not yet completed this task. The lower region of the sense of location area, the entorhinal cortex, has a resolution that is so coarse or large that it is virtually impossible to measure it.

"The thinking is that the coordinate points for some of these maps are as much as ten metres apart," explains Moser.  "To measure this we would need to have a lab that is quite a lot larger and we would need time to test activity over the entire area. We work with rats, which run around while we make measurements from their brain. Just think how long it would take to record the activity in a rat if it was running back and forth exploring every nook and cranny of a football field. So you can see that we have some challenges here in scaling up our experiments."

New way to organize
Part of what makes the discovery of the grid modules so special is that it completely changes our understanding of how the brain physically organizes abstract functions. Previously, researchers have shown that brain cells in sensory systems that are directly adjacent to each other tend to have the same response pattern. This is how they have been able to create detailed maps of which parts of the sensory brain do what.

The new research shows that a modular organization is also found in the highest parts of the cortex, far away from areas devoted to senses or motor outputs. But these maps are different in the sense that they overlap or infiltrate other. It is thus not possible to locate the different modules with a microscope, because the cells that work together are intermingled with other modules in the same area.

A map and a constant
The researchers were surprised, however, when they started calculating the difference between the scales. They may have discovered an ingenious mathematical coding system, along with a number, a constant. (Anyone who has read or seen "The Hitchhiker's Guide to the Galaxy" may enjoy this.) The scale for each sense of location is actually 42% larger than the previous one.

"We may not be able to say with certainty that we have found a mathematical constant for the way the brain calculates the scales for each sense of location, but it's very funny that we have to multiply each measurement by 1.42 to get the next one. That is approximately equal to the square root of the number two," says Moser.

Maps are genetically encoded
Moser thinks it is striking that the relationship between the various functional modules is so orderly. He believes this orderliness shows that the way the grid map is organized is genetically built in, and not primarily the result of experience and interaction with the environment.

So why has evolution equipped us with four or more senses of location?

Moser believes the ability to make a mental map of the environment arose very early in evolution. He explains that all species need to navigate, and that some types of memory may have arisen from brain systems that were actually developed for the brain's sense of location.

"We see that the grid cells that are in each of the modules send signals to the same cells in the hippocampus, which is a very important component of memory," explains Moser. "This is, in a way, the next step in the line of signals in the brain. In practice this means that the location cells send a different code into the hippocampus at the slightest change in the environment in the form of a new pattern of activity. So every tiny change results in a new combination of activity that can be used to encode a new memory, and, with input from the environment, becomes what we call memories.

The article is a part of doctoral research conducted by Hanne and Tor Stensola, and has been funded through an Advanced Investigator Grant that Edvard Moser was awarded by the European Research Council (ERC). 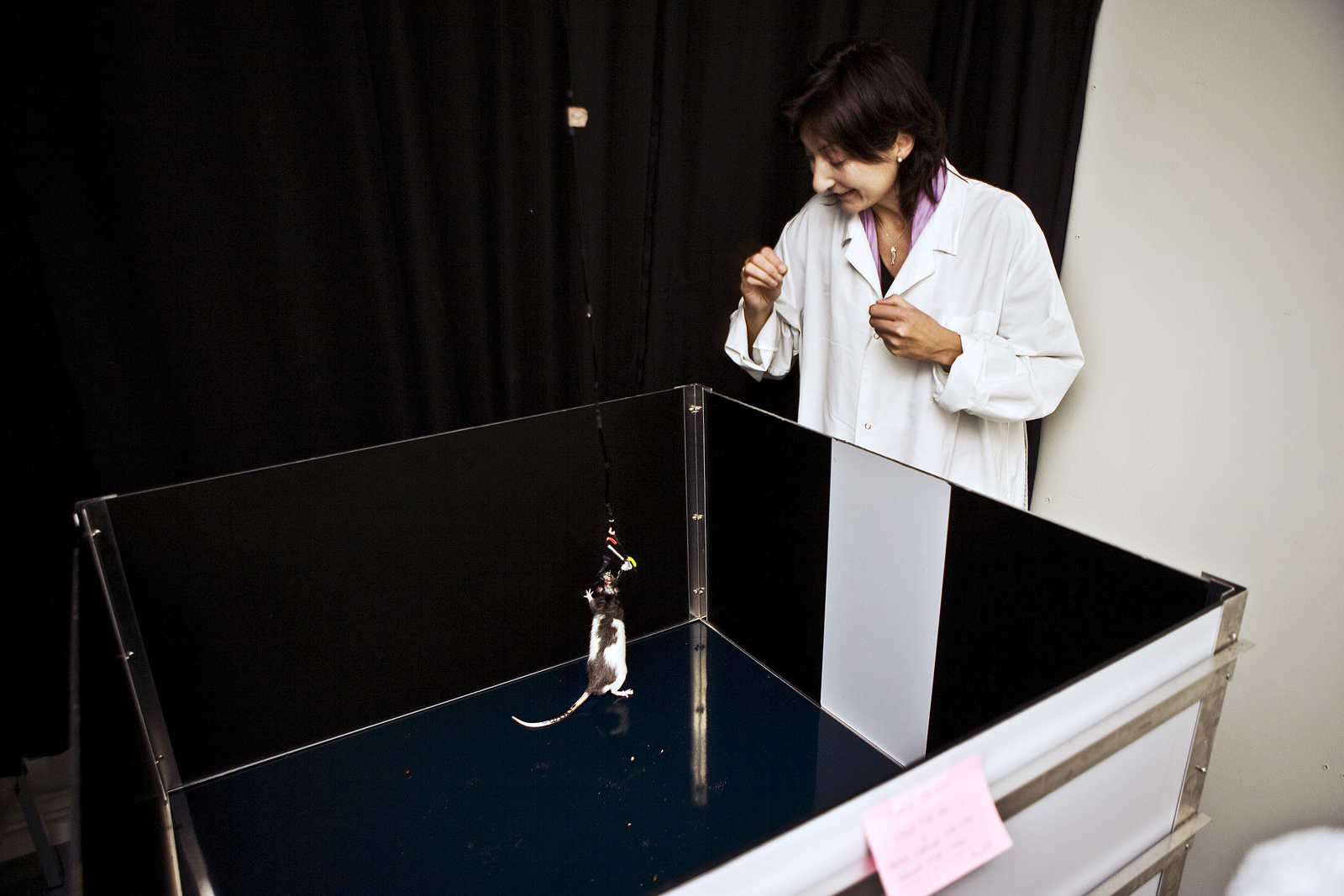 Thinking outside of the box: May-Britt Moser next to a typical recording environment. In this square environment, the rat forages for cookie crumbles while signals from brain cells are recorded. Credit: CBM/Kavli Institute for Systems Neuroscience Hi-res version. 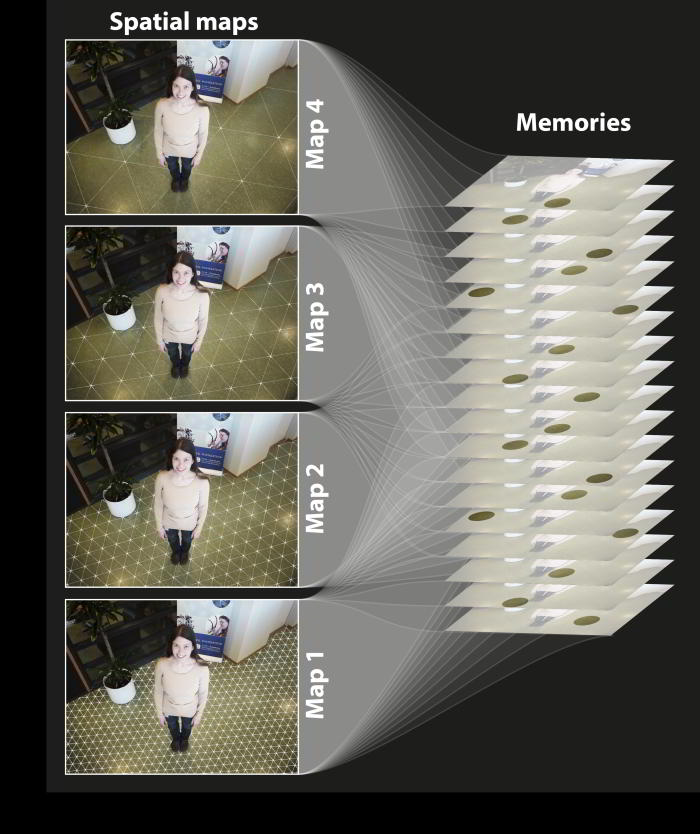 Spatial location is closely connected to the formation of new memories. Until now, grid cells were thought to be part of a single unified map system. New findings from the Norwegian University of Science and Technology demonstrate that the grid system is in fact composed of a number of independent grid maps, each with unique properties. Each map displays a particular resolution (mesh size), and responds independently to changes in the environment. A system of several distinct grid maps (illustrated on left) can support a large number of unique combinatorial codes used to associate new memories formed with specific spatial information (illustrated on right). The findings are published in the 6 December issue of the journal Nature and are a part of doctoral research conducted by Hanne Stensola (picture) and Tor Stensola at the Kavli Institute for Systems Neuroscience. Credit: Tor Stensola, CBM/Kavli Institute for Systems Neuroscience Hi-res version.

The entorhinal cortex is a part of the neocortex that represents space by way of brain cells that have GPS-like properties. Each cell describes the environment as a hexagonal grid mesh, earning them the name ‘grid cells'. The panels show a bird's-eye view of a rat's recorded movements (grey trace) in a 2.2x2.2 m box. Each panel shows the activity of one grid cell (blue dots) with a particular map resolution as the animal moved through the environment. Credit: Tor Stensola, CBM/Kavli Institute for Systems Neuroscience   Hi-res version.