(10.09.2012) NTNU researchers have patented and are commercializing GaAs nanowires grown on graphene, a hybrid material with competitive properties. Semiconductors grown on graphene are expected to become the basis for new types of device systems, and could fundamentally change the semiconductor industry. The technology underpinning their approach has recently been described in a publication in the American research journal Nano Letters.

The new patented hybrid material offers excellent optoelectronic properties, says Professor Helge Weman, a professor at NTNU's Department of Electronics and Telecommunications, and CTO and co-founder of the company created to commercialize the research, CrayoNano AS. "We have managed to combine low cost, transparency and flexibility in our new electrode," he adds.

"We do not see this as a new product," Weman says. "This is a template for a new production method for semiconductor devices. We expect solar cells and light emitting diodes to be first in line when future applications are planned."

Sunny outlook for nanowires
"Graphene is experiencing tremendous attention worldwide," Weman says. "Companies like IBM and Samsung are driving this development in the search for a replacement for silicon in electronics as well as for new applications, such as flexible touch screens for mobile phones. Well, they need not wait any more. Our invention fits perfectly with the production machinery they already have. We make it easy for them to upgrade consumer electronics to a level where design has no limits."

This invention is thus thought to be an enabler for a future platform for electronics and optoelectronics devices. One possible device with very large market potential is a nanowire solar cell. This type of solar cell has the potential to be efficient, cheap and flexible at the same time. The invention also makes it possible to imagine a future with self-powered nanomachines and advanced 3D integrated circuits built on graphene and semiconductor nanowires, enabling smaller and more efficient electronics.

Flexible future
Weman himself envisions flexible self-powered consumer electronics integrated into everything from clothes to notepads, and of course traditional cell phones, tablets and exercise accessories.

"Semiconductors grown on graphene could become the basis for new types of device systems, and could transform the semiconductor industry by introducing graphene as a preferred substrate for many applications," he says.

The research underpinning this development has been strongly supported by the Research Council of Norway since 2007. The project is embedded in the NTNU NanoLab, MBE Lab and Nano-Photonics Laboratory. The technology has been patented by NTNU Technology Transfer, of which CrayoNano is a spin-off company. The founders, Professor Helge Weman and Professor Bjørn-Ove Fimland, are both responsible for important research groups and labs at NTNU.

The article "Vertically Aligned GaAs Nanowires on Graphite and Few-Layer Graphene: Generic Model and Epitaxial Growth" was recently published in Nano Letters, which reports on fundamental research in all branches of nanoscience and nanotechnology.

Here's how they do it: 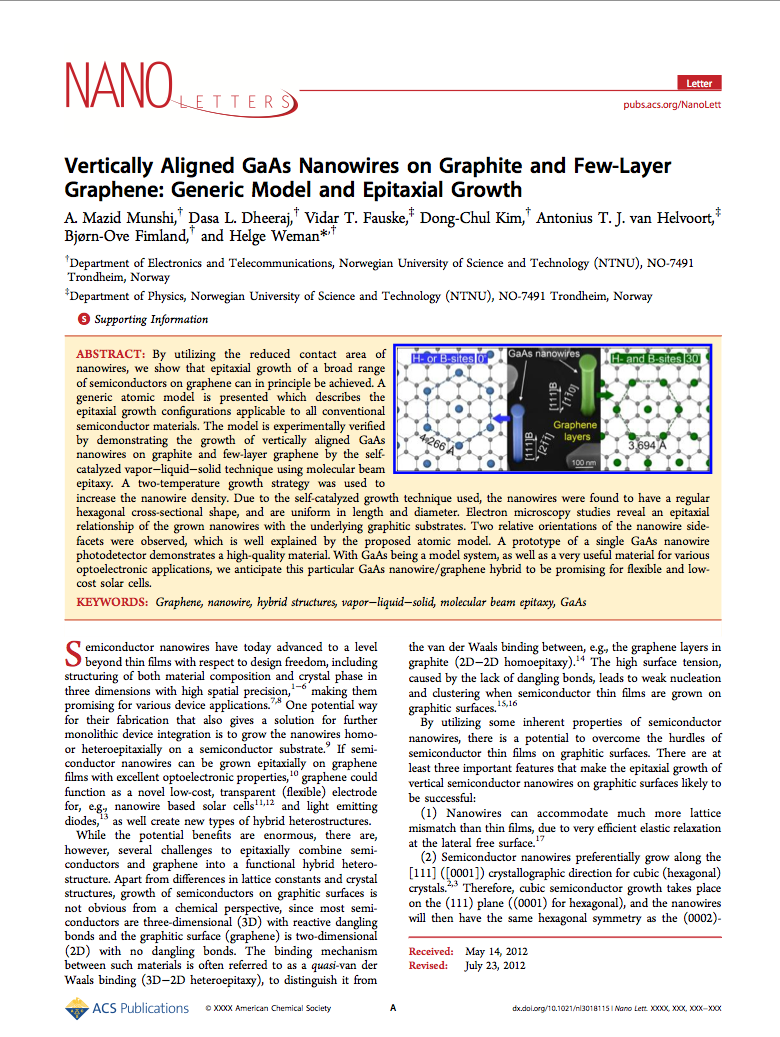