Electric field controls properties on the surface of small droplets

(04.07.2013) By designing droplets using electricity, researchers have opened new possibilities in physics. This technique could possibly be used for everything from extracting oil from wells to creating makeup and food.

You've seen Hollandaise sauce or mayonnaise that has separated, or that shiny layer of oil that forms on top of skin cream. This mixture of water and oil is called an emulsion, but it can be difficult to keep emulsions from separating. A special substance called an emulsifier is used to keep the mixture stable and prevent sseparation. 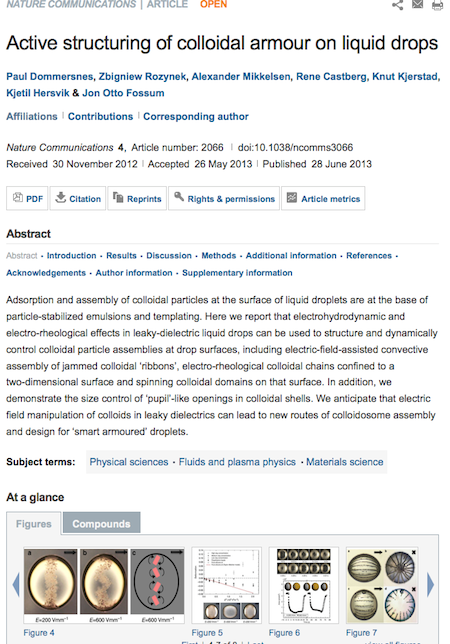 This is an ongoing problem for the food and medical industries, as well as for oil recovery. In fact, the petroleum industry also has to deal with the opposite problem, which is to separate oil that is pumped up from a well in a mix of water and gas.

Now, researchers from the Norwegian University of Science and Technology have found a new method to control how drops of oil behave, using electricity. The results were published in late June in the prestigious journal Nature Communications.

The "pupil effect"
"We have conducted a very simple experiment to show that we can control particles on the surface of oil droplets using an electric field," explains Jon Otto Fossum, a professor in the Department of Physics at the university.

The researchers used micrometre-sized particles of clay and silicone oil droplets for their experiment.  First, the clay particles coated the droplet, but when the voltage was turned on, the clay particles made a ring around the drop. By controlling the strength of the electrical voltage, researchers can control how the particles accumulate in the ring, much like the way your eye controls how much the pupil opens in response to light.

The researchers were also able to control the emulsion's properties with electricity. Its features can be turned on and off quickly, without adding new chemicals.

Food, medicine, and more oil?
The new method may possibly be useful in the production of foods, household products, and cosmetics, as well as in developing new ways to transport drugs in the body and for enhanced oil recovery. The "pupil effect" may possibly also be used as an optical element controlled by an electric voltage.

"It is also interesting that we have shown that we can use an electric voltage and environmentally friendly clay particles to control droplets, which means that we might be able to design these kinds of emulsions without adding chemicals. This could be important for applications where you want to avoid introducing foreign chemicals into the environment, such as in the oil industry," says Fossum.

More ideas
Fossum says the experiment is basic research in physics, and offers a number of possibilities across disciplines. The research group has thought of several different applications for their finding that they may consider filing patents for, but they do not want to discuss specifics.

"The physical or chemical control of emulsions is very important for many areas of technology and for many different applications," said Fossum.

Fossum says next step is to expand their understanding of what the experiment illustrates, and to perform more laboratory experiments with particles other than clay, and with other types of fluids. At the same time, the researchers are exploring some of the ideas they have about how their technique can be applied.