(20.09.2013) High-intensity exercise is shown to be protective against coronary heart disease (CHD) and is well known as a popular and time-saving approach to getting fit. But what about people who already have heart disease? Previously, these patients were told to exercise, but only at a moderate intensity to protect their hearts. More recently, however, researchers have found that high-intensity exercise is very beneficial for these patients. But how intense should these sessions actually be?

A new study from the K. G. Jebsen – Center of Exercise in Medicine at the Norwegian University of Science and Technology (NTNU) in Trondheim, Norway examines this question in detail. Researchers analyzed data from four randomized, controlled trials conducted at the center to try to determine what characterized the most effective high-intensity training programme for this patient group.

The researchers used changes in VO2max, which is peak oxygen uptake, as a measure of the effectiveness of the different exercise regimes.  The study participants (n=112) were aged 18+ and all had coronary heart disease.

"When we compared VO2max before and after the training period, we found that the number of training sessions, the subject's age or baseline fitness levels had no impact," says Trine Moholdt, a postdoctoral fellow at the center and lead author of the study. "But the intensity of the intervals had a significant effect, and seems to be the most important characteristic of an effective interval session."

Dose-response relationship
The intensity of the training was categorized according to the participant's heart rate zone (% of maximum heart rate (HRmax)). High-intensity training is when an individual's HR during intensive periods is 85-95% of HRmax.

Overall, VO2max increased by 11.9 % after an average of 23.4 training sessions during the 12-week period for all subjects.

Practical questions
Moholdt says that people who start exercising using interval training often have lots of practical questions. How much incline should their treadmill have? Can they shorten their lower-intensity time to just 2 minutes? Why 4 minutes and not 5?

"Knowing that pushing yourself to over 90 % of HRmax may save you from an extra training session that week, encourages us to investigate even the small details," says Moholdt.

"When people give priority to exercise in their otherwise busy lives, they want to know that they are doing it the right way. At the same time, I want to emphasize that all exercise is better than none! Some people are not able to exercise at high intensity because of other health problems, and one should then look for other alternatives."

The four studies, which were composed of patients who either had acute coronary syndrome or angina pectoris, confirmed previous findings that high-intensity exercise is safe, even for patients with CHD.  Moholdt says it would be interesting to see if these finding hold true for healthy subjects, as well as for patients with more severe heart disease. 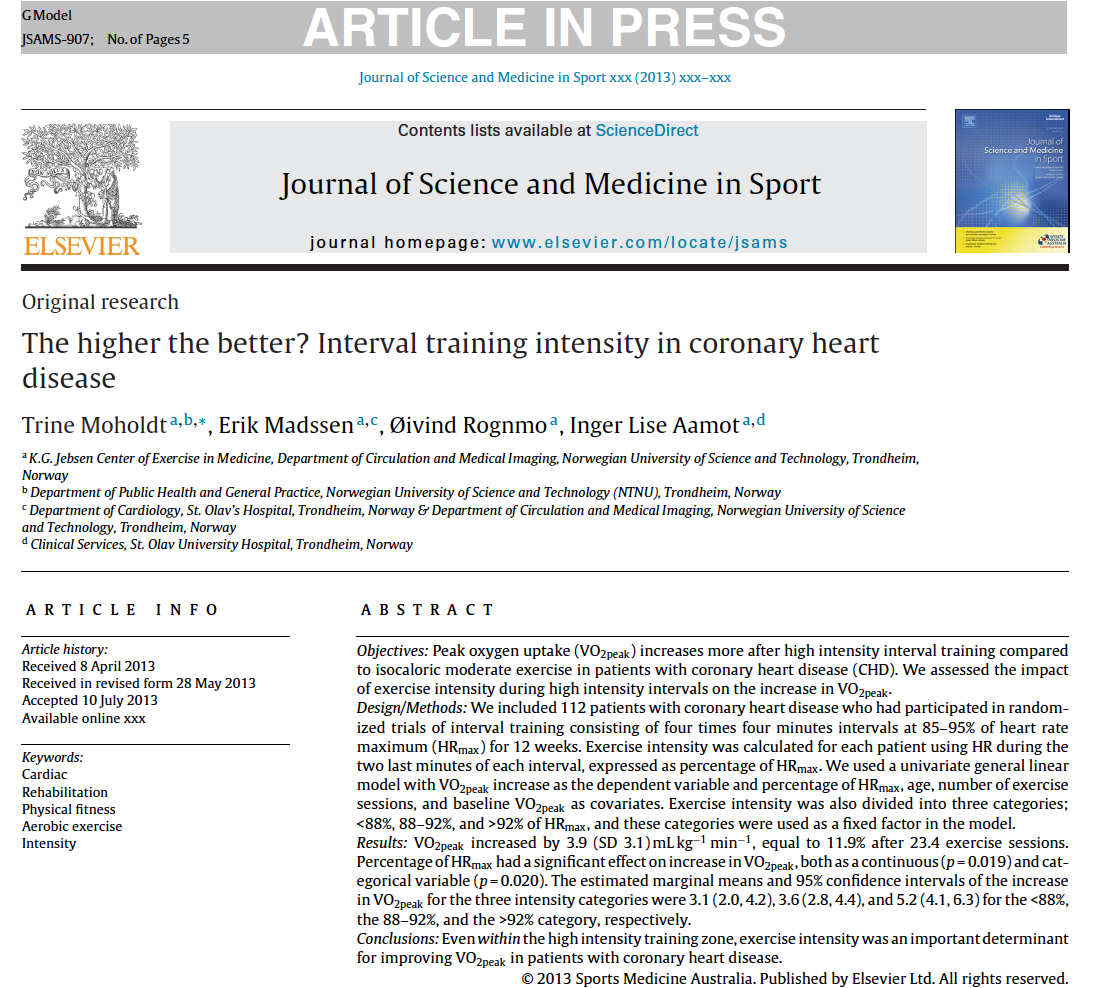