A “light switch” in the brain illuminates neural networks

A “light switch” in the brain illuminates neural networks

(04.04.2013) Researchers from NTNU's Kavli Institute of Systems Neuroscience are able to see which cells communicate with each other in the brain by flipping a neural light switch. The results of their efforts are presented in an article in the 5 April issue of Science magazine.

There are cells in your brain that recognize very specific places, and have that and nothing else as their job. These cells, called place cells, are found in an area behind your temple called the hippocampus. While these cells must be sent information from nearby cells to do their job, so far no one has been able to determine exactly what kind of cells work with place cells to craft the code they create for each location. Neurons come in many different types with specialized functions. Some respond to edges and borders, others to specific locations, others act like a compass and react to which way you turn your head. 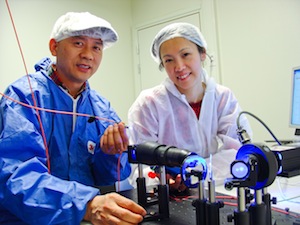 Now, researchers at the Kavli Institute for Systems Neuroscience have developed a range of advanced techniques that enable them to identify which neurons communicate with each other at different times in the rat brain, and in doing so, create the animal's sense of direction.

"A rat's brain is the size of a grape. Inside there are about fifty million neurons that are connected together at a staggering 450 billion places (roughly)," explains Professor Edvard Moser, director of the Kavli Institute. "Inside this grape-sized brain are areas on each side that are smaller than a grape seed, where we know that memory and the sense of location reside. This is also where we find the neurons that respond to specific places, the place cells. But from which cells do these place cells get information?"

From spaghetti to light switches
The problem is, of course, that researchers cannot simply cut open the rat brain to see which cells have had contact. That would be the equivalent of taking a giant pile of cooked spaghetti, chopping it into little pieces, and then trying to figure out how the various spaghetti strands were tangled together before the pile was cut up.
A job like this requires the use of a completely different set of neural tools, which is where the "light switches" come into play.

Neurons share many similarities with electric cables when they send signals to each other. They send an electric current in one direction – from the "body" of the neuron and down a long arm, called the axon, which goes to another nerve cell next in line. Place cells thus get their small electric signals from a whole series of such arms.

So how do light switches play into all of this?

Viruses do the work
"What we did first was to give these nerve arms a harmless viral infection," Moser says. "We designed a unique virus that does not cause disease, but that acts as a pathway for delivering genes to specific cells. The virus creeps into the neurons, crawls up against the electric current, and uses the nerve cell's own factory to make the genetic recipe that we gave to the virus to carry."

The genetic recipe enabled the cell to make the equivalent of a light switch. Our eyes actually contain the same kind of biological light switch, which allows us to see. The virus infection converts neurons that have previously existed only in darkness, deep inside the brain, to now be sensitive to light.

Then the researchers inserted optical fibres in the rat's brain to transmit light to the place cells that had light switches in them. They also implanted thin microelectrodes down between the cells so they could detect the signals sent through the axons every time the light from the optical fibre was turned on.

"Now we had everything set up, with light switches installed in cells around the place cells, a lamp, and a way to record the activity," Moser said.

10,000 times
The researchers then turned the lights on and off more than ten thousand times in their rat lab partners, while they monitored and recorded the activity of hundreds of individual cells in the rats' grape-sized brains. The researchers did this research while the rats ran around in a metre-square box, gathering treats. As the rats explored their box and found the treats, the researchers were able to use the light-sensitive cells to reveal how the rat's brain created the map of where the rat had been.

When the researchers put together all the information afterwards they concluded that there is a whole range of different specialized cells that together provide place cells their information. The brain's GPS – its sense of place – is created by signals from head direction cells, border cells, cells that have no known function in creating location points and grid cells. Place cells receive both information about the rat's surroundings and landmarks, but also continuously update their own movement, which is actually independent on sensory input.

"The biggest mystery is the role that the cells that are not part of the sense of direction play. They send signals to place cells, but what do they actually do?" wonders Moser.

"We also wonder how the cells in the hippocampus are able to sort out the various signals they receive. Do they ‘listen' to all of the cells equally effectively all the time, or are there some cells that get more time than others to ‘talk' to place cells?"

The findings are published in Science on Friday 5 April. 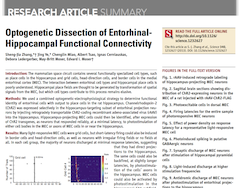