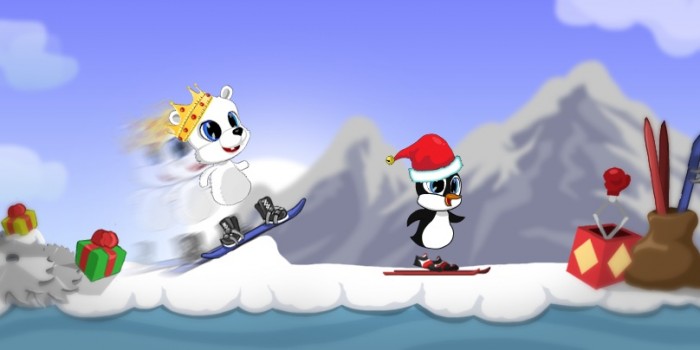 Last week, Dirtybit, the Norwegian company responsible for the game, launched Fun Run 2.0, which could rocket the game back to the top of the US App store's most downloaded games – again. The company, started by students at the Norwegian University of Science and Technology (NTNU), is the only app developer in the country that has managed to reach the number one spot for downloaded apps in the United States.

But this success has been hard won –  several of the Dirtybit gang are still NTNU students in addition to working full time with the game that they created in their spare time.

You 've probably seen people sneak away from what they really should be doing to play Fun Run. Whether it's in a university reading room, on the bus, or even in meetings at work, these game addicts are not alone. Since Fun Run was launched in September of 2012, it has been downloaded more than 30 million times and has 10 million active users a month.

At the beginning, the app developers, all NTNU students, used a university reading room as their home base. That was until the game was downloaded more than 100,000 times a day, and overtook the big game giants on the US list of popular free apps.

"We then had to rethink things. It was ultimately impossible to manage and develop the game from a reading room when it took off the way it did," says business manager and Dirtybit co-founder, Nicolaj Broby Petersen. No wonder – when it was on the top of the US app list, Fun Run was being downloaded more half a million times a day.

Along with fellow student Erlend Børslid Haugsdal, Broby Petersen founded the company in 2011 when they were both computer science students at NTNU. Now the company has eight employees and is located in the Teknobyen innovation centre in Trondheim. Half of the Dirtybit crew have finished their studies, while the rest will be finishing in the spring.  Broby Petersen himself is in his last year of a master's degree at NTNU's School of Entrepreneurship.

The rented office in Teknobyen is reminiscent of Google's offices in Mountainview, California, with separate rooms where you can unleash your creativity. The break room is home to a nice, soft sofa, a flat screen TV and cold beer that awaits the crew for when the workday is over and the game developers can play more together.

Dirtybit is the first company that has been successful with what are called real-time multiplayer games. Fun Run has been ranked as the # 1 app in ten different countries. Everything about the game has been created by the NTNU students on their own – from its development and  programming to its design and marketing. Fun Run is a multiplayer racing game for up to four players, and is available as a free download for Android, iPhones and iPads.

The world's most popular

While the game wa

s a smash hit just months after it was first released, it was only a matter of time before interest in the game waned. But with the launch of the winter version of the game – Fun Run 2.0 – Dirtybit's game is now climbing up the charts again.

"It's really wild that we are on the rise again now, a year after we were on top, and still without spending a single penny on marketing. Not many people have managed this," said Broby Petersen.

The new update provides players with six new winter courses and the choice of two new characters – a penguin and a polar bear. The developers have also released other seasonal accessories, such as snowballs, gifts, skiing and snowboarding. Dirtybit has also made some technical changes to improve the gaming experience.

Money to be made

Although the game is free, there is still money to be made in games like Fun Run. The money comes from what are called in-app purchases, where users can choose to buy more accessories if they do not have the patience to win them by playing.

"As much as 70 per cent of the total revenue on the App Store is from the apps that have in-app purchases. This is where customers spend the most money, and that is something we have done well with from Fun Run. However, we are fully aware that it is difficult to predict developments in the games industry, which is very volatile and has lots of ups and downs," said Broby Petersen. He said that the company has now set some capital aside in case one of their next games doesn't succeed the way Fun Run has.

Although it is difficult to keep a game alive, since the lifetime of an app game is not usually more than two years, there is little evidence to suggest that students' success will stop with Fun Run. They also have a game called Drop in the Box, and next year they are planning to launch a new game. Here, the cute animal characters from Fun Run will be replaced with small monsters that you can train and play a more protracted game. Dirtybit hopes they can keep their dream jobs and live from creating games for years to come.

Big in the Middle East

Dirtybit says that a great deal of Fun Run's success is due to social media. The hashtag #funrun was widely used by people searching for game buddies, because players need to know the user names of the people that they want to play with so they can add them as friends.

That appears to be what made the game take off in popularity. Photos tagged with Fun Run on Instagram show that people play anywhere and anytime, and not just in the US, but also in Switzerland, Singapore, Israel and the Arab Emirates.

"We are experiencing huge growth, especially in Arabic -speaking countries, where the game has really taken off. They bake cakes with characters from the game, decorate water scooters and have even set up Fun Run musicals. It is very special, to say the least," says Broby Petersen, who added that because of the interest in the Middle East, the developers have translated the game into eight different languages, including Arabic.

But even while they have experienced solid growth due to their huge success, the NTNU students have also experienced the tough competition that characterizes the gaming industry. Fun Run has more than its share of copycats, the developers say.

"There are many games out there now that are either pure copies of Fun Run, or at least are clearly inspired by our game. It's great that we have helped to start a trend for this type of game, but at the same time, it clearly shows that we have to constantly strive to stay ahead of the competition. We'll do this by adopting more innovative technologies and new concepts in the next game," Broby Petersen said.