(06.01.2010) Feeling guilty that you didn't breastfeed your children enough – or at all? Relax. New research shows that breast milk is not as important for either the mother or the child's health.

Researchers at the Norwegian University of Science and Technology have found that the association between breastfeeding and healthy children is not as strong as has previously been believed. It is true that breastfed infants are slightly healthier than bottle-fed babies. But apparently it is not the milk that makes the difference. Instead, the baby's overall health is all determined before he or she is born.

So why do so many studies associate breastfeeding with better health for young babies? The answer is simple: If a mother is able to breastfeed, and does so, this ability is essentially proof that the baby has already had an optimal life inside the womb.

Hormones are a determinant
Researchers at NTNU's Department of Cancer Research and Molecular Medicine have recently found a correlation between the level of male hormones (androgens) in pregnant women and how much the women breastfed after birth.

"Pregnant women who have higher levels of androgens breastfeed less," says Professor Sven M. Carlsen. "Probably, this is a direct effect of hormones that simply limit nursing ability, by reducing milk production in the breast."

For example, there is a clear link between testosterone and breastfeeding ability. In fact, until 1980, when more suitable drugs were introduced, testosterone was used to stop milk production in circumstances where it was desirable.

"This was one of the reasons that we wanted to investigate whether the effects attributed to mother's milk really should be attributed to hormonal factors in pregnant women", says Carlsen.

Not a matter of will
Carlsen and colleagues have for years researched the connections between the conditions for the foetus in utero, and the effects these conditions have on the newborn. Among other things, they have looked at the relationship between testosterone levels and various risk factors that are believed to affect breastfeeding.

Women who are smokers, or are overweight, or who have the hormonal disorder polycystic ovary syndrome (PCOS) tend to breastfeed less than their peers. All the women in these groups have higher levels of testosterone in their bodies when they are pregnant.

In contrast, the older a woman is, the more likely she is to breastfeed. All these relationships can be explained by the level of testosterone, Carlsen says. "It's thus not the woman's will to breastfeed. Women who had more testosterone in their bodies during pregnancy feel the effects of a hormone that limits breastfeeding. That is clearly why it is not as easy to breastfeed."

Placenta is key
Carlsen believes that it is the placenta, not breast milk, that has more of an effect on children's health.

"What happens is that there are hormones that come from the foetus that are converted to testosterone and oestrogen in the placenta -- if the process goes as it should. This is an energy intensive process. If the placenta does not have enough energy, a portion of the testosterone that would have been converted to oestrogen is in fact not converted. Then what happens is that the testosterone goes to both the mother and child, and probably affects both of them", he said.

For the mother, this means reduced development of glandular tissue in the breasts, so that the ability to make milk does not develop optimally during pregnancy. This translates into less or no milk breast milk.

For the child, it looks as if increased exposure to testosterone as a foetus can lead to an increased incidence of obesity, type 2 diabetes and polycystic ovary syndrome in girls.

Much fuss
Breastfeeding is less common in younger women, smokers, women who have had preeclampsia or are overweight, or with lower birth weight or premature babies, or in women with PCOS, and when the child is a boy.

There are a number of models that are used to explain this – erroneously, Carlsen and his colleagues say. For example, it is claimed that the bond between a mother and her child will not be as strong if the baby is a boy than if the baby is a girl.

"This is the purest nonsense", Carlsen says. "Boys are not less loved by their mothers than girls. We can blame biology here, not mothers. All these relationships can be explained by one and the same cause, namely the level of male hormones during pregnancy."

"We find it very interesting that almost all of the factors previously shown to be associated with breastfeeding can be explained by changes in testosterone levels in the mother during pregnancy," he adds.

Message to new mothers: Relax!
The researcher stresses that it is inappropriate to blame mothers who are unable to breastfeed as much as they are advised. Mothers should not worry that their children will be sicker than children who are breastfed. And even though a child's health risks have already been established at birth, the differences are so small that they can only be detected when looking at large groups.

Carlsen says mothers should not worry about this. "If you are pregnant, you should live as healthy a lifestyle as possible: quit smoking, cut back on your consumption of coffee and tea, and avoid alcohol", he says. "And when you give birth, you will do the best that you can, if you want to breastfeed."

The research adds that if a mother has a hard time breastfeeding, she should just relax and enjoy her newborn. "Don't let overzealous health professionals give you a guilty conscience" he says.

No breast milk benefit
The researchers examined more than fifty international studies about the relationship between breastfeeding and health. Most studies concluded that the more children are nursed, the healthier the children – which on the surface is correct, Carlsen says.

"But even if this is statistically true, it is not because of breastfeeding itself. There are very few studies that have examined the underlying controls on breastfeeding ability" he adds.

The largest study that has been done on breastfeeding and health was undertaken in Belarus. More than 17 000 women and children were studied, and the children were followed until they were six years old. This study cuts the legs out from underneath most of the assertions that breastfeeding has health benefits, the researchers say. For example, the Belarus study found no signs that asthma and allergies were less prevalent in children who were nursed for longer than children who were nursed less.

The only area where the study concluded that breastfeeding confers a benefit was in mental abilities.

"It appears that children who are breastfed have a small IQ advantage", Carlsen says. "But this needs to be confirmed in new, carefully planned and conducted studies."

Breastfeeding should be out of politics
The researcher believes it is time for nursing enthusiasts to calm down.

"There are many good reasons to breastfeed. But concern for the child's health is not one of them. There is no reason why women who are struggling to breastfeed should have to go around feeling guilty, or think that they are giving their child a poor start in life if they can't nurse. Baby formula is as good as breast milk", Carlsen says.

Carlsen adds that it is far worse for babies to have a tired, stressed-out mother with a guilty conscience, than to forgo breast milk. The health aspects of breastfeeding should be left out of political arguments, he says.

Breastfeeding is also the right approach for developing countries, where economics, hygienic conditions and the lack of natural resources makes breastfeeding superior to bottle feeding.

Exercise and diet
A study is underway to see if exercise has an impact on testosterone levels, and thus perhaps also on breastfeeding.

"We would also like to have funding to implement a larger study on the effect of diet and nutrition counselling for pregnant women. There is still much we do not know", Carlsen said. 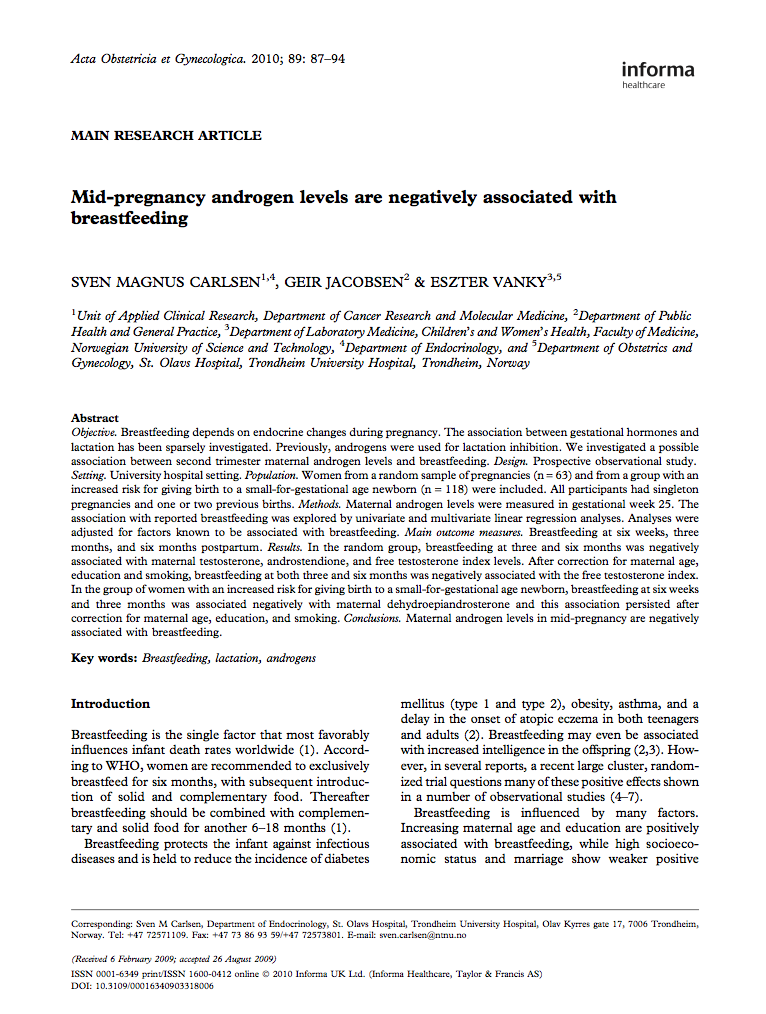