(11.04.2011) Norway's more than 1,000 year-old-city and historical capital, Trondheim, was a beehive of activity in medieval times. Recent archeologi 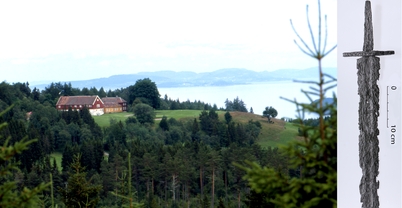 For centuries, Trondheim – or Nidaros as it was then called – was home to the Archdiocese of Norway, and also for the Faeroe Islands, the Orkney Islands, the Isle of Man, Iceland and Greenland. Nidaros Cathedral, the city's gothic cathedral, held reliquaries from St. Olaf and thus attracted thousands of pilgrims.

And the cathedral was not the only church in town. While just two of the many churches erected in the town center in medieval times still stand, 25 stone churches were built during the Middle Ages in the countryside around Trondheim.

"This charcoal production is most probably directly linked to major historic events and processes occurring in central Norway at the beginning of the Middle Ages. One obvious explanation is the Church's impact on economic growth and production as well as its demand for building materials," explains archeologist Ragnhild Berge a PhD candidate, based at the Museum of Natural History and Archaeology, a unit of the Norwegian University of Science and Technology (NTNU) in Trondheim.

Weapons, wars, and urbanization
Civil wars were common in central Norway during the 12th century, which likely drove a demand for weapons. This in turn would have resulted in increased iron smelting and metal forging during the period. Excavations in the medieval parts of Trondheim have found large areas used for metal refining dating from the end of the 12th century to the middle of the 14th century.
"It can't be a coincidence that the charcoal production in Trondheim coincides with periods of great economic growth, mobilization and power struggles and also with increasing craft and trading activities. Urbanization and the creation of new governing entities in Norwegian medieval society, along with the founding of the archdiocese in 1152-1153, all created an environment that attracted power and resources, thus stimulating both local and regional production," says Berge. "The many types of metal working and craft production which took place in the town centre will have driven a huge demand for charcoal as fuel."

"But still – it did surprise us that most of the traces of use at Bymarka are from the production of charcoal. We also found a furnace used for the production of iron during the Viking Age. Charcoal and iron are products usually associated with rural wooded and mountainous areas. What we had expected to find was evidence of agriculture," Berge said.

Two-thousand-year-old fields
"Until quite recently, most towns had pastures and areas for agricultural purposes close by, to ensure a stable supply of dairy products and other agricultural goods. So finding five hundred charcoal pits in this area was quite a surprise," Berge explains.

"It's unlikely that you could produce charcoal and have agricultural activity in the same areas. The assumption has been that residents imported charcoal from more rural areas."

Another new find was that the area had first been settled much earlier than previously believed. "It had been assumed that Bymarka was settled from the Middle Ages, but we found agricultural traces dating back to the Merovingian period of 600-700 B.C. We also found traces of fields being worked about two thousand years ago."

Unparalleled, but perhaps not unique
The many building endeavors in Nidaros needed materials, which would explain the prevalence of the charcoal pits.

But Berge is reluctant to say that the large number of pit remains are unique to Trondheim: "While our finds of charcoal pits at Bymarka in Trondheim are essentially unparalleled in Scandinavia, the primary reason is most probably the lack of archaeological excavations in the outskirts of other cities."
Bymarka today is protected from development, and is a recreational area for the residents of Trondheim and habitat for wildlife.

"One of the reasons the research in Trondheim is so unique is that few Scandinavian cities have preserved areas of the medieval surrounding countryside to the same extent as Trondheim – meaning that traces of these types of activities are likely to have been erased," Berge notes.

The NTNU Museum of Natural History and Archaeology

NTNU's Museum of Natural History and Archaeology was selected as Norway's Museum of the Year in 2010. The museum develops and operates a number of Norway's oldest and largest natural and cultural history collections.