NTNU composer up for Grammy award

NTNU composer up for Grammy award

(28.01.2010)Professor Ståle Kleiberg of the Norwegian University of Science and Technology’s (NTNU) Department of Music and the Norwegian music label Lindberg Lyd have been nominated for a 2009 Grammy for best surround sound for the album "Treble and Bass." 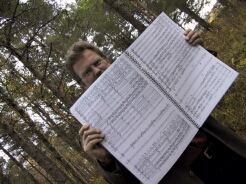 The awards ceremony is Sunday, January 31.

“Treble and Bass”, which features soloists Marianne Thorsen on violin and Göran Sjölin on double bass with the Trondheim Symphony Orchestra, has been released to great critical acclaim. In his review in the November/December 2009 issue of Fanfare Magazine (pdf), Jerry Dubins wrote: “...their sumptuous Romantic tapestries are woven on a modern loom that colors them in striking orchestral effects and often bold and imaginative harmonic and rhythmic reliefs.” Dubins called the surround sound “stunning” and gave the recording five gold stars, adding “more Kleiberg, please.”

Kleiberg and his colleagues are not the only Norwegians whose work is being considered for a Grammy award. StarGate Studios, a record production and songwriting team consisting of Tor Erik Hermansen and Mikkel S. Eriksen, both from Trondheim, are among the producers for Beyonce Knowles’s album “I am Sasha Fierce”, which has been nominated for Album of the Year.

This is the fifty-second year that the Grammys have been awarded. The ceremony will be held in the Staples Center in Los Angeles, California. Composer Ståle Kleiberg is professor of musicology at NTNU’s Department of Music, while violinist Marianne Thorsen is professor of violin and chamber music and Gøran Sjölin is a lecturer in the department.