(03.04.2009) If Nobel laureate Ivar Giæver could develop one technology for the betterment of society, it would be this: computers that could think, faster and better than humans do. 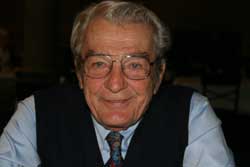 Then they could solve all the other technological problems facing humankind. "It would be fantastic," he says. Just shy of 80, with a leonine mane of silver hair and an engaging smile, Giæver is an unabashed supporter of technology, who thinks that fretting about the unintended consequences of future technological developments is a waste of time.

"One hundred years ago, people in New York City were worried about where they were going to get enough horses," he remarks wryly. "What we worry about now is not what people are going to worry about in the future."

Giæver's vision may seem either lofty or irresponsible, depending upon your view, but it's in keeping with an intellectual approach that led him from a degree in mechanical engineering from the Norwegian Institute of Technology in 1952 to the Nobel Prize in Physics in 1973. Giæver returned to Trondheim and his alma mater – now the Norwegian University of Science and Technology -- to talk about the interplay between physics and biology, and his view of the next frontiers for science.

From superconductivity to cell behaviour
The title of Giæver's talk, "DNA -- Nanotechnology and a little more", delivered to the Trondheim Polytechnic Association on April 1, gives a flavour of where the scientist's interests lie now. In fact, not long after conducting the research that won him the Nobel Prize, Giæver was awarded a Guggenheim Fellowship and spent a 1969 in Cambridge, England, studying biophysics. It's passion that he has pursued ever since.

Giæver's intellectual journey started in part because of a housing crisis in post-war Norway. After he graduated from NTH and did his year of obligatory military service, Giæver had hoped to settle in the Oslo area with his young wife and child. But housing was very tight, and he would have had to wait eight years to get a house. In 1954, three weeks after he realized how difficult it would be to get housing, Giæver and his young family were on their way to Canada and a new life, with Giæver hired on to work at Canada General Electric's Advanced Engineering Programme.

Paid to do research
In 1956, Giæver emigrated to the US to study in GE's A, B, and C engineering courses. It was here that he had an epiphany that would change the course of his career. "I made what I called the biggest discovery of my life," he said in an interview recorded for the Nobel Foundation in 2004. "I discovered that people could get paid for doing research. I was completely flabbergasted – I never heard of that -- These people went around¿wrote on the blackboard, looked like they had a good time. I said ‘That's what I want to do.'"

Giæver started working at GE's Research and Development Center in 1958 while simultaneously starting his PhD in physics at the Rensselaer Polytechnical Institute. In 1960, he performed the experiments with thin films, tunneling and superconductivity that would lead to his winning the Nobel Prize in Physics, an honour he shared with two others that year.

He finally left GE to become an institute professor at RPI in 1988. He also founded Applied BioPhysics, Inc., to exploit physical properties to make tools that could be used in drug discovery and cell research.

Limitless potential of biological research
Biological research, particularly genetic research, holds untold potential, he told an audience of nearly 200 at his Trondheim lecture. "We can do everything possible with genetic engineering," he said. "Everything that is natural is not necessarily the best."

Giæver was critical of Europe's reluctance to accept genetically modified foods, and addressed a number of questions from his audience about the potential problems that these foods might pose. "From my perspective, if you can make food that is better, healthier, uses less chemicals and is cheaper, then that is a good thing," he said. "There is no ethical problem."

In fact, he says, one of the best things that an engineering school can do for its students is to require them to study biology along with more traditional courses such as physics and mathematics. "Absolutely," he says. "That is where the new discoveries will lie. That is the future."