(28.09.2011) An experiment published in the 28 September issue of Nature in which rats are "teleported" shows how memory is organized into discrete 125 millisecond-long packets, enabling a smooth transition between one memory and the next.

You're rudely awakened by the phone. Your room is pitch black. It's unsettling, because you're a little uncertain about where you are – and then you remember. You're in a hotel room.

Sound like a familiar experience? Or maybe you've felt a similar kind of disorientation when you walk out of an elevator onto the wrong floor? But what actually happens inside your head when you experience moments like these? 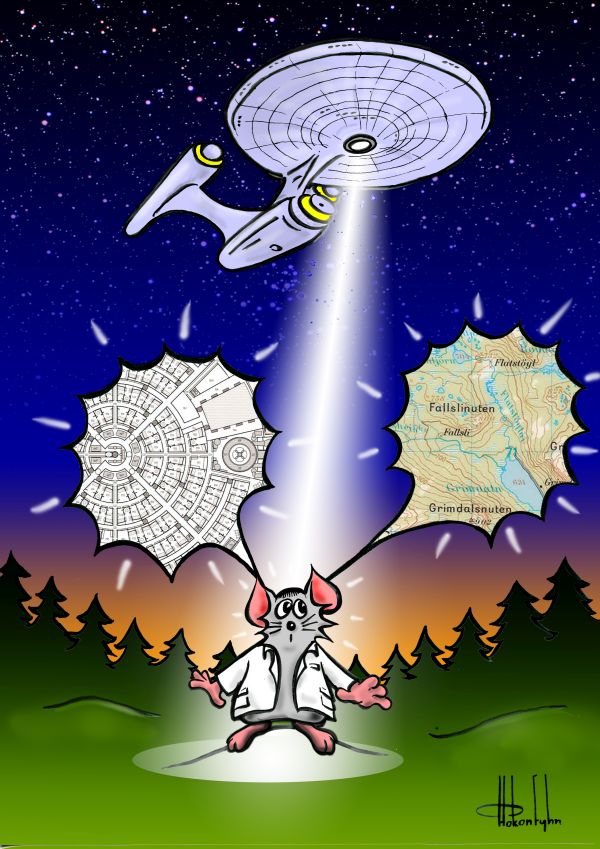 published in this week's edition of the journal Nature, researchers at the Norwegian University of Science and Technology's Kavli Institute for Systems Neuroscience describe exactly how the brain reacts in situations like these, during the transition between one memory and the next. The study employed a method that allowed them to make measurements right down to the millisecond level. The research was conducted in the laboratory of May-Britt and Edvard Moser, co-director and director respectively of NTNU's Kavli Institute, by first author Karel Jezek.

Memory quanta
Their findings show that memory is divided into discrete individual packets, analogous to the way that light is divvied up into individual bits called quanta.  Each memory is just 125 milliseconds long – which means the brain can swap between different memories as often as eight times in one second.

"The brain won't let itself get confused," says Professor May-Britt Moser, co-director of the university's Kavli Institute. "It never mixes different places and memories together, even though you might perceive it that way. This is because the processes taking place inside your head when your brain is looking for a map of where you are take place so fast that you don't notice that you are actually switching between different maps. When you feel a little confused, it is because there is a competition in your brain between two memories. Or maybe more than two."

Beam me up, Scotty
Brain researchers Edvard and May-Britt Moser are trying to understand exactly how the brain works. Their approach is to meticulously monitor electrical activity in different parts of the rat brain, while the rats explore different mazes. It's a painstaking approach that provides them ever more pieces to the puzzle that is the workings of the brain.

To explore the question of whether the brain mixes memories together, the researchers created a special box for their laboratory animals that effectively enabled them to instantaneously 'teleport' a rat from one place to another  -- without the help of the Starship Enterprise. Then, they tested how the brain handled the memory of place when the experience of that place suddenly changed from one location to another.

"Teleportation" with light
"We tricked the rats," May-Britt Moser explains. "They're not really teleported of course, but we have an approach that makes them believe that they have been. The features of the box, which give the rats a sense of where they are, are actually ‘constructed' out of different lighting schemes. So we can switch from one group of location characteristics to another with the flick of a light switch."

The rats were trained over a long time to believe that the various lighting schemes represented different rooms. The researchers can tell that the rats truly believe that they are in different places because of their brain activity. "Once we turn on one lighting scheme, we can read a very specific pattern of activity in the cells in the part of the rat's brain that creates maps," May-Britt Moser says. "And when we switch to the other lighting scheme, the map pattern in the brain is completely different."

When the researchers 'teleport' the rats from one place to another by flipping the light switch from A to B, the rats experience exactly the kind of confusion you feel when you momentarily don't know where you are. "But the mind doesn't actually mix up the maps," she says. "It switches back and forth between the two maps that represent rooms A and B, but it is never in an intermediate position. The brain can ‘flip' back and forth between the two different maps, but it is always either or, site A or site B."

The contours of the mind
May-Britt and Edvard Moser have previously discovered the location of the brain's sense of place, shown how the brain works to make memories distinctively different, and have found that the brain has a mechanism to switch between experiences through the use of senses and images stored as memories. Now the researchers have also shown how the brain switches between individual memories, and how long the brain lingers on the different bits of memory.

"We are beginning to get a glimpse of the contours of the mechanisms that make up the world of our thoughts," says May-Britt Moser.

Earlier this year May-Britt and Edvard Moser were awarded the Louis-Jeantet Prize for Medicine. In October, the couple will receive the 2011 Anders Jahre's Award for Medical Research. The award, which includes a NOK 1 million (€ 128,000) prize, is considered among the most prestigious of medical research awards in the Nordic countries.