Researchers on the hunt for information behind Nazi sign

(08.02.2010) David Tuddenham, a marine archaeologist at the Norwegian University of Science and Technology (NTNU), expected to find medieval artefacts during a routine archaeological survey of the Nidelva River for the city of Trondheim in December 2009. 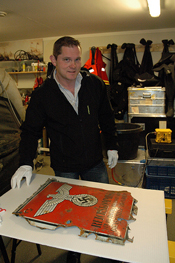 After all, Trondheim was founded more than 1000 years ago and was Norway’s original capital city, so it wouldn’t be unusual to find something from the Middle Ages hidden in the river’s murky bottom.

So when Tuddenham saw a bright red sign sticking up out of the river bottom mud, he wasn’t quite sure what it was – until he saw a swastika and the German eagle, symbols of the Third Reich, clearly from Germany’s occupation of Norway during the Second World War. Now Tuddenham and his colleagues at NTNU’s Museum of Natural History and Archaeology are hoping to find out more about the story behind the sign and how it ended up in the river.

Terboven’s realm
The sign, which measures 50 cm by 70 cm, says “Reichskommissar für die besetzten Norwegischen Gebiete Dienstelle Trondheim”, which translates as “Reich Commissariat for the Norwegian occupied areas, Trondheim service area.” Josef Terboven was Reichskommissar during the occupation of Norway, and researchers believe the sign would have probably hung at Stiftsgården - the Royal Residence in Trondheim -- which was Terboven’s residence when he was visiting Trondheim from his headquarters outside of Oslo.

At first Tuddenham wondered if the sign was a fake, partly because the Germans themselves called Trondheim “Drontheim”, and the sign clearly reads Trondheim. But further research showed that it was not unusual for civilian signs to use Norwegian place names. This, plus the exceptional quality of the sign itself, have convinced museum authorities that the sign is genuine.

Tuddenham is hoping that by publicizing the find, someone will come forward with pictures of the sign on the front of the royal residence, or may have stories about how it ended up on the bottom of the Nidelva River.

Thrown in the river – but when and why?
“We’re very interested in finding out if this is the sign that hung at the Royal Residence – it looks like some type of entrance sign,” Tuddenham says. “Our theory is that someone tore it down in 1945 during the liberation celebrations and threw it in the river – but we really don’t know.”

Terboven was particularly reviled in Trondheim after he imposed martial law for a brief period in 1942, and at the same time executed 34 Norwegians in Falstad forest, north of Trondheim. The Nazis executed more than 200 people in Falstad. The exact number of victims is unknown.

More photos for download are available from the museum.