On the same wavelength -- publication in 19 November issue of Nature

On the same wavelength-- literally

On the same wavelength-- literally

Researchers at the Kavli Institute for Systems Neuroscience and Centre for the Biology of Memory at the Norwegian University of Science and Technology (NTNU) have discovered a mechanism that the brain uses to filter out distracting thoughts to focus on a single bit of information. Their results are reported in the 19 November issue of Nature. 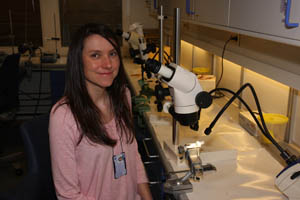 The human brain is bombarded with all kinds of information, from the memory of last night’s delicious dinner to the instructions from your boss at your morning meeting. But how do you “tune in” to just one thought or idea and ignore all the rest of what is going on around you, until it comes time to think of something else? In "Frequency of gamma oscillations routes flow of information in the hippocampus", published in the 19 November issue of Nature, researchers at the Kavli Institute for Systems Neuroscience and Centre for the Biology of Memory describe a mechanism that the brain uses to filter out distracting thoughts.

Think of your brain like a radio: You’re turning the knob to find your favourite station, but the knob jams, and you’re stuck listening to something that’s in between stations. It’s a frustrating combination that makes it quite hard to get an update on swine flu while a Michael Jackson song wavers in and out. Staying on the right frequency is the only way to really hear what you’re after. In much the same way, the brain’s nerve cells are able to “tune in” to the right station to get exactly the information they need, says researcher Laura Colgin, who was the paper’s first author. “Just like radio stations play songs and news on different frequencies, the brain uses different frequencies of waves to send different kinds of information,” she says.

Gamma waves as information carriers
Colgin and her colleagues measured brain waves in rats, in three different parts of the hippocampus, which is a key memory center in the brain. While listening in on the rat brain wave transmissions, the researchers started to realize that there might be something more to a specific sub-set of brain waves, called gamma waves. Researchers have thought these waves are linked to the formation of consciousness, but no one really knew why their frequency differed so much from one region to another and from one moment to the next.

Information is carried on top of gamma waves, just like songs are carried by radio waves. These “carrier waves” transmit information from one brain region to another. “We found that there are slow gamma waves and fast gamma waves coming from different brain areas, just like radio stations transmit on different frequencies,” she says.

You really can “be on the same wavelength”
“You know how when you feel like you really connect with someone, you say you are on the same wavelength? When brain cells want to connect with each other, they synchronize their activity,” Colgin explains. “The cells literally tune into each other’s wavelength. We investigated how gamma waves in particular were involved in communication across cell groups in the hippocampus. What we found could be described as a radio-like system inside the brain. The lower frequencies are used to transmit memories of past experiences, and the higher frequencies are used to convey what is happening where you are right now.”

If you think of the example of the jammed radio, the way to hear what you want out of the messy signals would be to listen really hard for the latest news while trying to filter out the unwanted music. The hippocampus does this more efficiently. It simply tunes in to the right frequency to get the station it wants. As the cells tune into the station they’re after, they are actually able to filter out the other station at the same time, because its signal is being transmitted on a different frequency.

The switch
“The cells can rapidly switch their activity to tune in to the slow waves or the fast waves”, Colgin says, “but it seems as though they cannot listen to both at the exact same time. This is like when you are listening to your radio and you tune in to a frequency that is midway between two stations- you can't understand anything- it's just noise.” In this way, the brain cells can distinguish between an internal world of memories and a person’s current experiences. If the messages were carried on the same frequency, our perceptions of the world might be completely confused. “Your current perceptions of a place would get mixed up with your memories of how the place used to be,” Colgin says.

The cells that tune into different wavelengths work like a switch, or rather, like zapping between radio stations that are already programmed into your radio. The cells can switch back and forth between different channels several times per second. The switch allows the cells to attend to one piece at a time, sorting out what’s on your mind from what’s happening and where you are at any point in time. The researchers believe this is an underlying principle for how information is handled throughout the brain.

“This switch mechanism points to superfast routing as a general mode of information handling in the brain,” says Edvard Moser, Kavli Institute for Systems Neuroscience director. “The classical view has been that signaling inside the brain is hardwired, subject to changes caused by modification of connections between neurons. Our results suggest that the brain is a lot more flexible. Among the thousands of inputs to a given brain cell, the cell can choose to listen to some and ignore the rest and the selection of inputs is changing all the time. We believe that the gamma switch is a general principle of the brain, employed throughout the brain to enhance interregional communication.”

Can a switch malfunction explain schizophrenia?

People who are schizophrenic have problems keeping these brain signals straight. They cannot tell, for example, if they are listening to voices from people who are present or if the voices are from the memory of a movie they have seen. “We cannot tell for sure if it is this switch that is malfunctioning, but we do know that gamma waves are abnormal in schizophrenic patients,” Colgin says. “Schizophrenics' perceptions of the world around them are mixed up, like a radio stuck between stations.”

The scientific goal of the Kavli Institute for Systems Neuroscience is to advance our understanding of neural circuits and systems. By focusing on spatial representation and memory, the investigators hope to uncover general principles of neural network computation in the mammalian cortex. The institute is one of just 4 neuroscience institutes funded by the Kavli Foundation. The other three are at Yale University, Columbia University, and the University of California -- San Diego.

NTNU's Kavli Institute coexists with the university's Centre for the Biology of Memory (CBM) but the scope of the Institute is broader and more long-term. CBM is part of the Centre of Excellence scheme of the Norwegian Research Council.