(20.12.2011) In a study that enrolled nearly 30,000 apparently healthy men and women, those who had an increase in their resting heart rate over a 10-year period had an increased risk of death from all causes and from ischemic heart disease, according to a study in the December 21 issue of the Journal of the American Medical Association, or JAMA.

Some evidence indicates that a high resting heart rate (RHR) is associated with increased cardiovascular disease and death in the general population, independent of conventional risk factors. However, whether changes in RHR over time influence the risk of death from ischemic heart disease (IHD) is not known, according to background information in the article.

NTNU's Javaid Nauman, PhD and colleagues, including Ulrik Wisløff, director of the university's K.G. Jebsen Center for Exercise in Medicine conducted a study to examine the association of changes in RHR with the risk of death from IHD in a population-based group consisting of 13,499 men and 15,826 women without known cardiovascular disease. Resting heart rate was measured on two occasions around 10 years apart, with the second RHR measurement taking place between August 1995 and June 1997. There was follow-up until December 2008. A total of 60 participants were lost to follow-up due to emigration from Norway.

Decreased RHR showed no general benefit with IHD mortality
The researchers also found that the association of changes in RHR with all causes of death were similar to those observed for IHD mortality, but the estimates of effect were generally weaker.

Analysis also suggested that a decrease in RHR showed no general benefit in relation to IHD mortality.

"As expected from the good general health of the study participants, the observed moderate-to-strong increases in relative risk corresponded to small risk increases in absolute terms. However, it is not clear to what extent we can extrapolate our findings to less healthy individuals in whom the underlying risk is likely to be higher," the authors note.

"Our findings provide further support for the hypothesis that RHR may be an important prognostic marker for IHD and total mortality. Information on RHR and its time-related changes are easy to obtain and follow-up and may be useful in identifying asymptomatic people who could benefit from measures of primary prevention, but further study in this area is warranted.

Want to read the JAMA article for yourself? Click on the paper below. 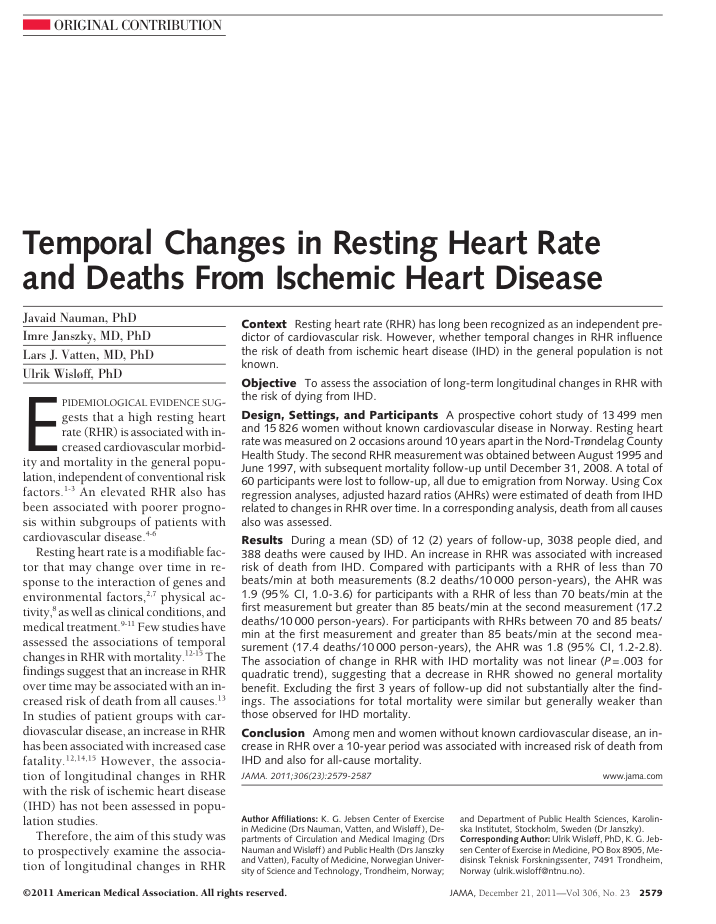 Learn more about the KG Jebsen Center for Exercise in Medicine.