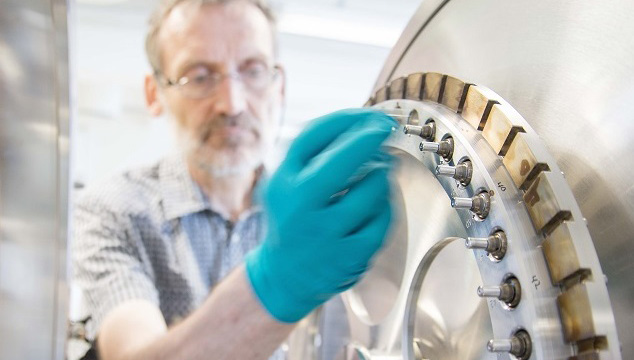 Radiocarbon dating is a dating technique based on the decay of the naturally occurring radioactive nuclide 14C, which has a half-life of 5730 years. The 14C/12C ratio remaining in a sample can therefore be used to calculate its age.

The production of 14C continuously happens in the upper atmosphere by cosmic radiation interacting with nitrogen. It is mixed into the lower atmosphere in the form of CO2 and further incorporated into organic material by photosynthesis, where it is spread into the food chain. As long as this distribution process is “alive”, the 14C/12C ratio stays approximately constant.

The 14C clock starts to tick once the material is “dead”, meaning it is no longer exchanging carbon with the environment. Due to the radioactive nature of 14C, the number of 14C atoms in the material will exponentially decrease. The measurement of the remaining fraction then allows to calculate the radiocarbon age of a sample.

The production of 14C in the atmosphere has not always been constant in the past, which also affected the 14C content of materials for dating. For this purpose, an international calibration curve composed of many known-age samples has been developed. The curve is made from dendrochronologically dated wood for the last 14’000 years which provides a high resolution, while for older periods, other material is used which comes with higher uncertainty. The calibration curve reaches back 50’000 years, which corresponds to the background level that can be reached in the analysis due to contamination during sample handling.

The results from the radiocarbon measurement are calibrated against this curve to yield a calendar age range as dating result. Depending on the age of the sample, the width of the calibrated age range can vary a lot, as there are flat periods in the calibration curve, meaning samples from these ranges lead to the same 14C content today. One example of this is the period from 1700 AD-1950 AD, which is challenging to use for 14C dating. The period after 1950 AD is dominated by radiocarbon production of atmospheric nuclear tests, leading to increased radiocarbon content in the atmosphere. This can be used to date very accurately in this period.