Microbes induce traffcking pathways that are important for activation, inactivation or evasion of Toll-like receptors (TLRs).

TLRs in macrophages initiate different destruction programs depending on the particular microbe encountered. TLR signalling proceeds through MyD88-MAL- and TRAM-TRIF-dependent pathways. Despite the large amount of research, we still do not know much about the cell biological mechanisms on how TLRs and their adapter proteins control killing of bacteria.

We have now pinpointed new important players in phagosomal signalling that are required for killing of Gram-negative bacteria. One of them is Rab11-FIP2 that transports cargo along actin flaments. The other is CD150 which modulates macrophage responses to microbes in mice. Moreover, we have made discoveries pointing to mechanisms on how Mycobacterium avium initiates inﬂammatory signalling from TLRs in the phagolysosome, however, a fraction still escapes the phagolysosome by modifying the compartment. In Theme 1, we aim to obtain more detailed mechanistic understanding of phagocytosis, phagosomal maturation and phagosomal signalling for mounting killing of bacteria. 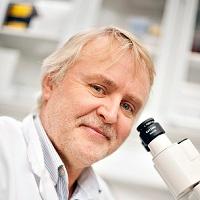