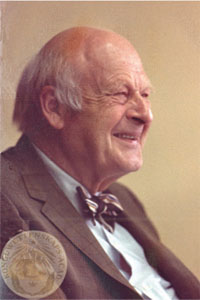 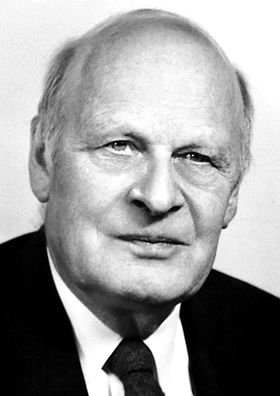 Onsager received the Ch.E. degree from the Norwegian Institute of Technology (Norges Tekniske Høiskole) in 1925. He was Peter Debye's assistant in Zürich until 1928, when he went to Johns Hopkins University. He was then instructor in chemistry at Brown University from 1928 to 1933. He became a Stirling Fellow at Yale University in 1933, and received a Ph.D. from Yale in 1935. He was appointed assistant professor there in 1934, associate professor in 1940, and J. Willard Gibbs Professor of Theoretical Chemistry in 1945. From 1972 to 1976, he was Distinguished University Professor at the University of Miami, Coral Gables. He died on October 5th 1976.

In 1968 Onsager was awarded the Nobel Prize in Chemistry, for his fundamental contributions to irreversible thermodynamics. The so-called Onsager reciprocal relations that he derived have been of tremendous importance in a wide range of applications. In addition to the theory of irreversible processes, Onsager did pioneer work in several other fields of chemistry and physics. The first articles he published concerned the thermodynamics and kinetics of electrolytes, topics to which he made important contributions throughout his scientific career.

In 1944 he baffled the scientific world with the exact solution of the two-dimensional Ising model, a model of a ferromagnet. The solution was a virtuosic mathematical feat. It was also important from a physical point of view, and started a development that led to a deeper understanding of phase transitions and critical points. From about 1940 Onsager was very interested in low-temperature physics. He suggested the quantization of vortices in liquid helium, and showed in 1952 how information about the distribution of electrons could be extracted from the de Haas-van Alphen effect.

The bulk of the archive consists of Lars Onsager's papers which include correspondence, notes, manuscripts, reprints, books, photographs, etc. The Norwegian University of Science and Technology received this large collection in November 1997 from Lars Onsager's sons and daughter, Erling Fredrick Onsager, Inger Marie Woerheide, Hans Tanberg Onsager and Christian Carl Onsager. Onsager's writing desk, chair, diplomas, etc. were also included in the bequest. As the photograph shows, these items are now displayed at Lerchendal Gård, the headquarters of the Norwegian Academy of Technological Sciences.

Onsager's widow, Margarethe Arledter Onsager, deposited most of Onsager's papers in Yale University Library in 1977-79, and several researchers (Stefan Machlup, Case Western Reserve University, Philip A. Lyons, William W. Watson, Raymond M. Fuoss, Andrew Patterson, Jr. and Derek Leaist, Yale University) helped to classify the material in Section II. A substantial part of this material was filmed in 1981, and is available on microfilm at Stirling Memorial Library, Yale University. Later, the collection was retrieved by the family and stored at the Onsager farm at Tilton, New Hampshire, until it was deposited in Trondheim.

Supplementary material was added to the collection in 1998, in particular restricted material, private letters, obituaries, writings about Onsager, and more photographs. The archive now consists of 53 boxes and 2 oversize folders, altogether about 9 shelf metres.

The material is divided into 12 sections, as outlined on the first page. Almost all of sections I-VII, and the first page of scientific papers by others (in section VIII), were filmed in 1981 by Yale University Library. In the list of contents, MS stands for manuscript, TS for typescript, and n.d. for no date.

The research material consists of Onsager's notes together with related reprints, manuscripts and correspondence. The folders are grouped in the following fourteen categories:

In many cases, Onsager's own descriptions on the original folders or envelopes were transferred to the new folders by the Yale Library, and put in inverted commas. These often abbreviated Onsager labels have been extended to more complete titles (given in brackets). Some folders have comments on them, written by the researchers who were helping Yale University Library with the classification. The initials on the comments refer to Stefan Machlup (SM), Philip A. Lyons (PAL), John Nagle (JN), Raymond M. Fuoss (RMF) and Andrew Patterson, Jr. (AP).

The complete correspondence index can be found at Arkivportalen.no.

The Nobel Prize in Chemistry 1968

The archive is an archive of great extent, and only selected parts have been chosen to be digitised.

The digitising work gained financial support from the Faculty of Natural Sciences and Technology and the Faculty of Information Technology, Mathematics and Electrical Engineering, both at NTNU. Prof. emer. Per Christian Hemmer and Eivind Hiis Hauge at NTNU selected the most important documents.

You will only find digital content on this page. The physical archive is located at Dora Library.

Complete index of the Onsager Archive – including non-digitised materials.