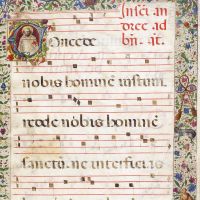 The music collection consists of approximately 18,000 printed pieces as well as music manuscripts. From the 18th century, chamber music constitutes the core of the collection. Of particular importance are the compositions and arrangements by Trondheim’s official town musician Johan Daniel Berlin (1711 – 1787) and his son, Johan Henrich Berlin. Also noteworthy is the primary component of the music collection: the manuscripts left by local composer and organist Martin Andreas Udbye (1820 – 1899). All music manuscripts are registered in Oria.. 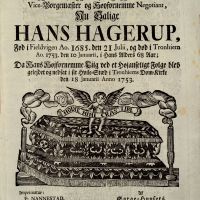 Personal tributes, religious verses and obituaries were published in connection with weddings and funerals of the more affluent citizens of Norway. Mostly from 18th-century Trondheim, the collection also includes older and newer material from Kristiania (Oslo) and Bergen. The wedding and funeral verses are not available in Oria.

List of wedding verses [bryllupsvers] (pdf, 801 kB) (alphabetically by the surname of the person addressed in the verse)

List of funeral verses [begravelsesvers] (pdf, 713 kB) (alphabetically by the surname of the person addressed in the verse) 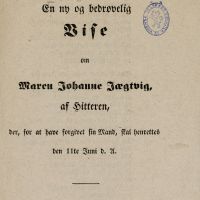 A skillingsvise, or broadside ballad in English, is printed on cheap paper, distributed as single sheets or pamphlets and sold for a skilling– a low-value coin. The library’s oldest broadside ballad is ‘Tuenne skøne wiser‘, printed in Copenhagen in 1558. The oldest Norwegian item in the collection is the ballad ‘Tvende nye lystige men sømmelige Viiser’, printed in Trondheim in 1750. The library holds 1507 broadside ballads ranging from the 16th century to the 20th century.

Leilighetsdikter, or occasional poems in English, are written for special occasions such as weddings or anniversaries, or for affluent families.

Katalog over våre skillingsviser [Catalogue of our broadside ballads] (pdf)

Search for occasional poetry [leilighetsdikt] in Oria - using the term leilighetsdikt and sorting to display the oldest material first.

NB! The library is open from Thuesday 18. August.

The library is closed.