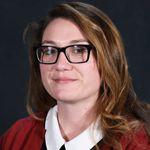 My current project, "Speaking the Unspeakable: Gendered Narratives of Trauma, the Law, and Pedagogy" has been funded by the Department of Teacher Education at NTNU. I am also the founder of the research group "North American Studies."

I am a member of the editorial board of Currents, the University of Michigan's National Center for Institutional Diversity's peer-reviewed publication, which "connects scholarship in diversity, equity, and inclusion to practice and public discourse." I have served as an outside reader for publications such as American Studies in Scandinavia, English Journal, and Social Semiotics. I have also guest lectured at Interlochen Arts Academy.

I completed my PhD in English, with focus on Critical Theory and 20th Century American Literature, at the University of Kentucky in 2016. Before joining the ILU faculty at NTNU, I was a faculty member in Liberal Arts at Interlochen Arts Academy where I taught courses for students in grades 9-12.

“The Lyricism of Marginality: Biopolitics in Trump-Era Dystopian Fiction,” European Association of American Studies, May 1st - May 3rd 2020, Warsaw Poland.

“The One You’re With: Adultery and Divorce Law Reform During the Sexual Revolution,” International Conference on Narrative, May 30 – June 1st 2019, Pamplona Spain.

“A Rational Continuum:” the Legacy of Roe and the Right to Sexual Privacy,” Nordic Association for American Studies, April 25, 2019.

“Unspeakable Acts: Free Gay Speech and the Rise of the Queer Novel,” International Association for the Study of Sexuality, Culture and Society, Bangkok, July12-14 2017.

“You and Your Folks: Interracial Desire and Legal Subjectivity,” International Conference on Narrative, Amsterdam, June 16-18 2016.

“The Mask and Hustler Identity,” International Association for the Study of Sexuality, Culture and Society, Dublin Ireland, June 17-20 2015.