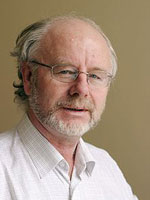 Odd Magnus Faltinsen is currently a Professor of Marine Hydrodynamics at NTNU. He has worked on broad aspects of hydrodynamics of displacement ships, high-speed craft, offshore structures and fish farms including the effect of hydroelasticity. He has developed an educational program in marine hydrodynamics at NTNU, Trondheim and made “analytical and practical contributions to the innovative analysis of wave loads and resulting motions of ships and offshore structures” (National Academy of Engineering, USA).

He has educated 59 PhD. Faltinsen is the author of the three textbooks Sea loads on Ships and Offshore Structures, Hydrodynamics of High-Speed Marine Vehicles, Sloshing (co-authored with A. N. Timokha). They have all been published by Cambridge University Press and are translated to Chinese. The sea-load book has also been translated into Korean. He has authored about 450 publications in scientific journals, conferences and books, and given about 50 keynote and honours lectures.

Faltinsen was born in 1944 in Stavanger, Norway, and obtained a cand. real. degree in applied mathematics at the University of Bergen in 1968 and a PhD degree in Naval Architecture and Marine Engineering in 1971 at the University of Michigan. He was employed by DNV from 1968 to 1974, was dosent in marine technology from 1974 to 1976 and professor of Marine Hydrodynamics from 1976 at NTNU. He was project leader of the Growth Point Centre on Hydroelasticity at NTH/SINTEF (1991 – 1996) and the Strong Point Centre on Hydroelasticity at NTNU/SINTEF (1997-2001). He was key scientist at the Centre of Excellence on Ship and Ocean Structures (CeSOS), NTNU (2002-2012) and is a Senior Scientific Advisor at the Centre of Excellence on Autonomous Marine Operations and System (AMOS), NTNU from 2013. He was visiting professor 3 times 1-year periods at MIT, USA and 3 month periods at the Research Institute of Applied Mechanics, Kyushu University, Japan and INSEAN, Rome, Italy. He is a visiting professor at University College London, honorary professor at Harbin Engineering University and Academic Master at Dalian University of Technology.

He gave the 15th Georg Weinblum Lecture, 1992-1993 and Third Annual Honors Lecture, The Offshore Technology Research Centre, College Station and Austin, Texas; 1993. He received the Fridtjof Nansen’s award for outstanding research in science and medicine in 2011. The 26th International Workshop on Water Waves and Floating Bodies held in Athens on   April 17-20, 2011 was dedicated to Professor Odd M. Faltinsen for his “lifetime scientific achievements”. The “Professor Odd Faltinsen Honoring Symposium on Marine Hydrodynamics” was arranged at OMAE 2013, Nantes, France in June 9-14, 2013. He received the OOAE Division-ASME Lifetime Achievement Award in “grateful recognition of significant lifetime contributions to marine and offshore hydrodynamics” in June 2013 and the Sobena International Award in 2014. He is the presenter of 2016 Wallace Lecture at MIT.

Abrahamsen, B. C., Faltinsen, O. M, 2011. The effect of air leakage and heat exchange on the decay of entrapped air pocket slamming oscillations, Physics of Fluids, 23, 1-17

Abrahamsen, B. C. ,  Faltinsen, O. M., 2012, The natural frequency of the pressure oscillations inside a water-wave entrapped air pocket on a rigid wall, Journal of Fluids and Structures 35, 200-212

An, S., Faltinsen, O.M., 2013, An experimental and numerical study of heave added mass and damping of  horizontally submerged and perforated rectangular plates, Journal of Fluids and Structures, 39, 87-101

Greco M., Lugni C., Faltinsen O.M., 2014, Can the water on deck influence the parametric roll of a FPSO? A numerical and experimental investigation, European Journal of Mechanics - B/Fluids, 47.