He is the employee’s voice when co-locating campus

He is the employee’s voice when co-locating campus

In the years to come, Iver Johnsen (44) will represent all employees by being a full-time union representative in the extensive co-location of campus and ensure that participation takes place in accordance with the agreement. 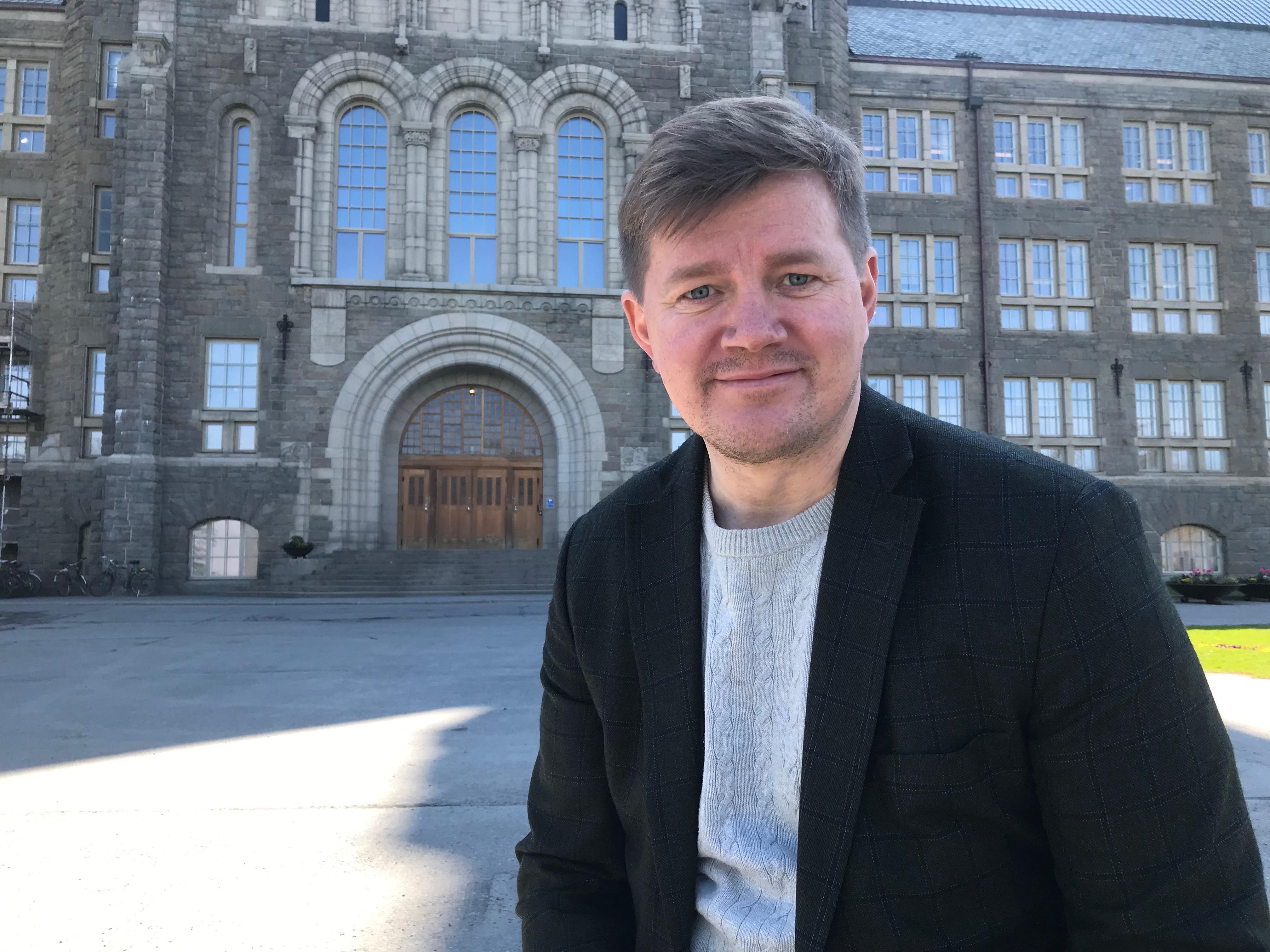 Written by: May Brit Leirtrø Røstad

It is soon time for exams, and the long “Stripa”, which connects Sentralbyggene at Gløshaugen, is unusually quiet this Monday morning at eight o´clock. Students read and prepare for their exams, steps leading them closer towards working life. For the employees, everyday life continues as before, although in summer mode. Inside the Campus-Lab, the week’s first meeting is about to be finished. The meeting participants leave half a can of freshly brewed coffee as they rush to the next meeting on the agenda. As a starting point of the work week, the union representative Iver Johnsen fills a cup, and with that he leaves the weekend’s confirmation behind. His focus is now back on the role as full-time union representative in NTNU’s campus development and more specifically the process of co-locating campus.

To gather the scattered academic environments in the area around Gløshaugen, and build enough university buildings to house them all, is a huge national project. But the project does not end with the last moving box. Because even though the co-location involves construction projects, this is primarily about organizational development for better research and teaching. The buildings will facilitate this but it is not enough in itself to develop buildings. In order to achieve academic goals, there is much to be done.

– My main task in this process is to make sure that participation and co-determination takes place after the agreement, so that employees' rights are taken care of, says Iver engaged.

It requires its coffee cup.

Iver has worked for a long time as a senior engineer at the Faculty of engineering, and he has experience from workshops and laboratories at Perleporten. He took on a position as a locally elected union representative at NTNU for Norsk Tjenestemannslag (NTL) in 2006. He liked it so much that he has been working full-time as deputy chairman of the union since 2012, with ongoing contact with the employer both centrally and locally. It has been a wide range of tasks, within wage negotiations, personnel issues and organizational development. From the beginning of 2019 he was appointed by the main association consisting of all the unions, to work exclusively with co-locating campus. Initially for a period of three years.

– As a campus employee representative, the tasks will be slightly narrower, but it is still about having good contact with the employer in relation to what will happen in the future and how it affects the individual employee’s work, he says.

It is a sincere commitment that lies behind the decision to take on this task. But also, a good portion of humility in relation to the responsibility that comes with it.

– But I am confident in the role. I know NTNU and the arenas for various decisions quite well after working a few years centrally as union representative, Iver points out.

Real influence at the right time

He is very concerned that there should be good and predictable flow between the campus project, the academic communities and the union representatives.

– One of my challenges is to try to create an arena for co-determination and participation at a time when it is possible to influence. There is much to be discussed and investigated. I think it is a challenge for the project that many of the early decisions and premises that are laid are on such an overall level that it does not yet feel relevant to the academic environment or the individual employee. There are many decisions that must be made before reaching the level of detail that specifically affects the individual. The experience may be that the possibility of real participation comes too late, he exemplifies.

Iver thinks it is an exciting and demanding project, with many aspects.

– We have a job to do with getting the agreement and the project to hang together, so that this is done at the right time. On the one hand, we must say what we mean and help to influence decisions, and on the other hand, we should not delay the project either. Nobody benefits if building and moving takes a long time. It is energy draining. But I will never compromise on the fact that the solutions must be good.

Depending on a good foundation

Iver points out that NTNU already has both good and less good experiences from slightly larger projects.

– Closest in time is the merger. Then we faced similar challenges getting the project, the organization and the unions to work together. We controlled the merger internally. One challenge now is that we are also controlled by external factors, with actors such as Statsbygg, the Ministry of Education and the municipality. There are several dimensions and larger things happening. Consideringhow complicated the merger was for employees, one must take into account that the co-location will be too. It is important that we lay a good foundation now to achieve good cooperation and reduce the risk of unwanted conflict levels.

He believes that a predictable process and good information along the way are important success factors.

– The closer things come to the individual's work situation, or the individual's office chair, the more engagement and interest it awakens. And potential conflict. As mentioned, when the project reaches this level, then most decisions are made. Therefore, it is important that the working environments out there start to discuss co-location. It may seem as though the engagement and work related to new campus is still in a bubble that has not quite reached the inividual’s workplace. I believe that it can be difficult to engage heavily yet because it is too little specific.

The question about the future office workplaces, however, is not lacking in engagement.

– It will not disappear but it is an energy that must be worked on and which we must take into the project. One must dare to continue that discussion. I constantly meet questions such as "what will happen to my office?" Or "do I get an office, or will I get worse solutions?". People are very afraid of that.

Iver wishes there was more time for engagement and involvement among the scientific staff.

– I think the project would benefit with more involvement from them. However, there is not enough time to reflect on these questions out there. People are concerned with the daily operations and getting on with their everyday lives. I think it is demanding for professional groups in the departments to have time and space to sit down and discuss campus properly, and things that will happen in two and three years within a campus project.

He uses location of academic functions as an example:

– There are a lot of exciting things to be investigated now, related to locating academic functions; large laboratories, an innovation center, the placement of the central administration, developing Vestskråningen and Grensen gently, student welfare and what kind of hubs we want. These are discussions that should have been discussed and investigated quite broadly. What does this mean for us as a professional group? What can we get out of this? It should be able to create a commitment out there. But I think it might be a little too far away still. We must get a discussion that reaches down to a group level. If one wants qualitative feedback, one must prepare the academic communities. There are researchers, teachers and scientists who have full calendars and project portfolios that cannot put this away to suddenly join a survey. If one wants to get hold of this competence or these inputs, it has to be planned how we can engage the scientific community. As a union representative, I think that when professionals and scientists are to engage, it should be by virtue of their affiliation and role within the core business, not necessarily the professional knowledge they possess.

– All faculties have to a greater or lesser extent ownership into the co-location of campus. Therefore, the campus should be on the agenda in each LOSAM* in the future, with the question; “What does this mean for us? Which input should we work on in the various surveys or projects that are going on?” In any case, the goal should be to set aside time and resources for those questions. Deans and institute leaders should prioritize this, Iver urges.

Friday 24th of May SESAM* and NTNU Campus Development met in a full-day workshop on involvement and participation. The purpose was to strengthen cooperation between the project and formal co-determination arenas, by identifying any challenges and finding satisfactory measures.

SESAM is a collaborative committee according to the provisions of the main agreement with representatives from the employer and employees at NTNU. SESAM takes care of information activities, discussions and negotiations (IDF) on matters under the main agreement and the adaptation agreement that are common to the entire NTNU, and when a case affects several units. SESAM discusses issues that are presented to the Board. SESAM also deals with issues that are transmitted from the local cooperation committee (LOSAM).