Fitness numbers and health – The HUNT3 and HUNT4 Fitness studies

Cardiorespiratory fitness is very important for longevity and health. The maximal oxygen uptake is the most precise measure of overall cardiovascular fitness.

To investigate the distribution of maximal oxygen uptake across a healthy, adult population, we tested more than 4,600 healthy Norwegians between 20 and 90 years of age. The tests were performed between 2006 and 2008 as part of the third wave of the Nord-Trøndelag Health Study (HUNT3).

From 2017 to 2019 (HUNT4) we repeated the tests in more than 1500 of the same persons – now ten years older. This is the world's largest collection of repeated gold-standard measurements of cardiorespiratory fitness in healthy adults.

We still use data from the HUNT3 Fitness Study in much of our research. From the same material we also made our popular Fitness Calculator, a non-exercise algorithm that estimates fitness accurately and preditcts future health, and our Maximum Heart Rate Calculator. The first data from the HUNT4 Fitness Study is also published, and more is to come.

The HUNT3 Fitness Study is Europe's largest database of directly measured fitness in a general population. The study also allow us to find reference values for various other cardiorespiratory measures, such as the maximum tidal volume. The data further suggests that the anaerobic thresholds is around 77% of maximum oxygen uptake for most, or at an intensity equivalent to approximately 88% of maximum heart rate.

However, aging affects fitness less in people who exercise with high intensity. Among physically inactive persons, average decline in fitness was 15% in ten years. Participants who reported exercising with moderate intensity for at least 150 minutes a week had a decrease of 9%. Among those who exercised for at least 75 minutes at high intensity every week, the maximum oxygen uptake decreased by only 5%.

Women and men below the gender-specific mean were four to eight times more likely to have a cluster of at least three cardiovascular risk factors – called the metabolic syndrome – compared to the most fit quartile of subjects. We also observed that maximal oxygen uptake may represent a continuum from health to disease, and that a general 5 mL/kg/min lower maximal oxygen uptake was associated with more than 50% higher odds of having the metabolic syndrome.

Furthermore, the follow-up data ten years later showed that those who preserve their maximum oxygen uptake well over a ten-year period have a healthier development of risk factors for cardiovascular disease. Men and women with less reduced fitness had less adverse changes in cholesterol profile, blood pressure, resting heart rate and waist circumference.

Moreover, high cardirespiratory fitness reveals the risk of heart attack in healthy persons. We found a strong link between higher fitness and reduced risk of a coronary event during the nine years following the HUNT3 Fitness Study. Only 147 participants had a heart attack or were diagnosed with angina pectoris during follow-up. The 25 % who measured the highest fitness levels had half the risk compared to those with the lowest fitness levels.

We also found that the lipoprotein profile of healthy people with low maximum oxygen uptake is similar to the lipoprotein profile of people with insulin resistance. The results are based on data from 211 healthy, middle-aged participants of the HUNT3 Fitness study. Half had high fitness, whereas the other half had low fitness, despite the fact that both groups were the same age and reported the same level of physical activity. Those with low fitness had higher levels of several lipids in large, atherogenic VLDL particles, as well as higher levels of triglycerides in small, also atherogenic LDL- and HDL-particles.

The HUNT3 Fitness Study has also shown us that the left atrium of the heart is larger in healthy adults with high fitness than in health adults with lower fitness. A large left atrium is a criterium for diastolic dysfunction, where the hear has reduced capability to fill with blood between each beat. However, our study shows no association between atrial size and diastolic heart function. This suggests that fitness should be taken into consideration when assessing if left atrial volume is a sign of future heart disease.

We have also related higher cardiorespiratory fitness to better lung function. We studied the association between forced expiratory lung volume in one second (FEV1) and maximum oxygen uptake in 741 HUNT3 Fitness Study participants aged 20 to 79 years, and found a linear relationship between better lung function and higher fitness in men, women, young, elderly and non-smokers. 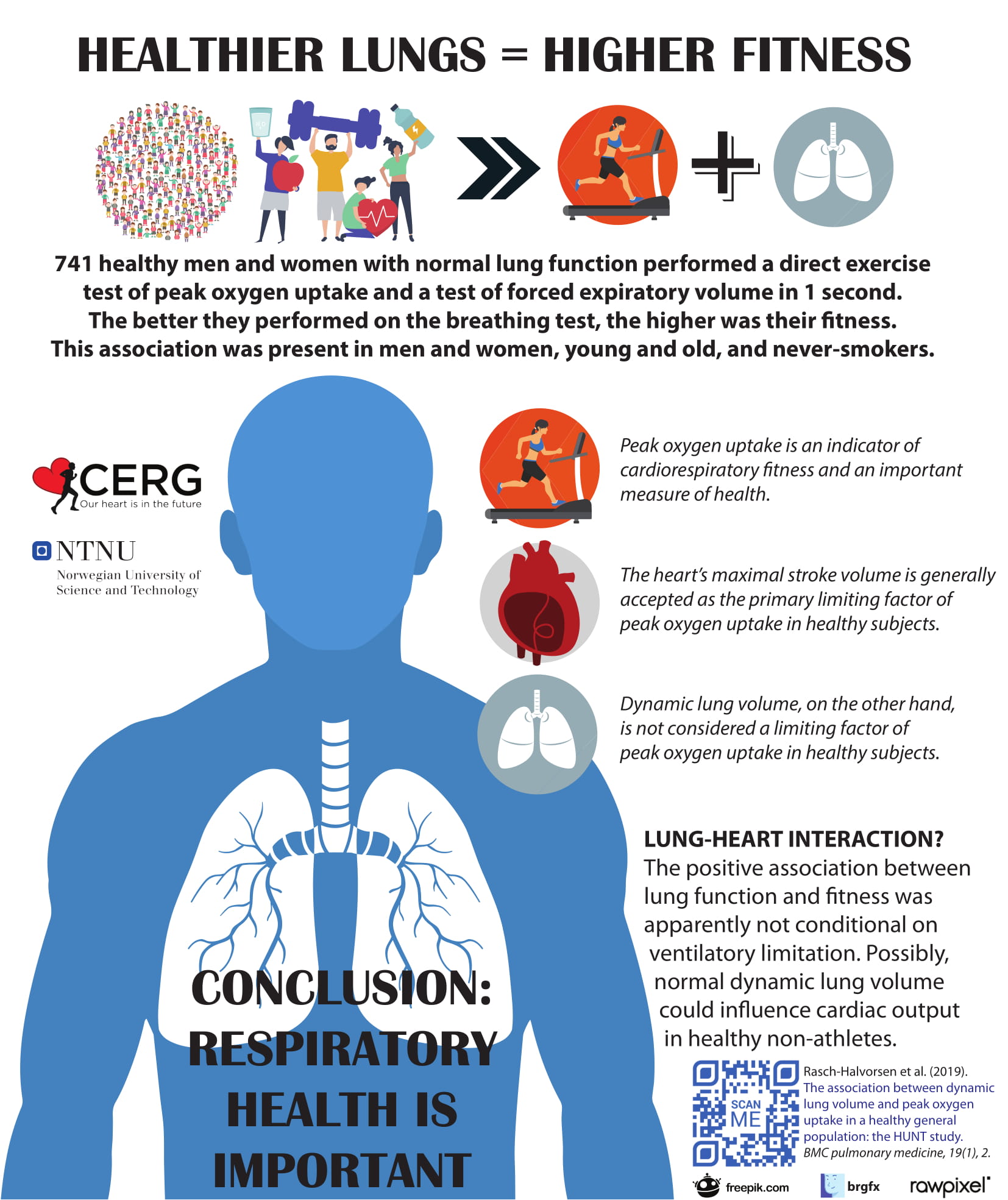 Read the full research article:
The association between dynamic lung volume and peak oxygen uptake in a healthy general population: the HUNT study

Furthermore, we found that the lower cardiorespiratory fitness, the higher levels of C-reactive protein (CRP) in blood. CRP levels indicate general inflammation, and high CRP is considered a risk factor for cardiovascular disease. The results might indicate that poor fitness contributes to increased inflammation, and that exercise to improve aerobic capacity could affect CRP levels positively. 1400 women and men from the HUNT3 Fitness Study was included in this study.

We have also found less headache in young adults with high fitness. Nearly 4000 of the HUNT3 Fitness Study participants also answered headache questions in HUNT3, and in those aged between 20 and 50 years there was significantly increasing prevalence of any headache, migraine and tension-type headache with lower fitness. Actually, the 20 % with the lowest fitness numbers had more than twice the odds of any headache and almost four-fold likelihood of migraine compared to the fittest 20 %.

In two different studies, we have used the HUNT3 Fitness Study database to reveal new genetic variants that are closely linked to high or low cardiorespiatory fitness. One of them, analysing the full human genome and more than 14 million genetic variants, is the world's largest genome-wide association study to look for links between genetics and directly measured VO2 max.

This study revaled two genetic variants that contribute significantly to VO2 max in women and could be confirmed in a British validation cohort. The statistical power of this record-breaking analysis makes us quite confident that these genes are true fitness genes. In addition, the study has revealed a number of candidate genes, which may have an impact on fitness but must be investigated further in other studies.

The other study found six genetic variants that are directly tied to fitness in the HUNT3 Fitness Study and in the Generation 100 study. These fitness genes were also found to be associated with cardiovascular health: The more good fitness genes a person has, the lower are the levels of several cardiovascular risk factors.

Moreover, we have used the HUNT3 Fitness study to verify that the gene COX7A2L is a highly relevant gene for maximum oxygen uptake, Favorable genetic variants within this gene leads to increased cellular respiration in the mitochondria of muscle cells, and are associated with phycial fitness and body composition in several population-based studies.

Micro-RNAs are miniscule molecules that regulate the activity of our genes, and we identified three micro-RNAs that were indepentently associated with low fitness and could have potential as biomarkers of current and future health.

The tests from the HUNT3 Fitness Study are also included in an international database called FRIEND-I, aiming to establish global reference values for cardiorespiratory fitness for women and men of all ages. The database include 12,000 treadmill tests of directly measured maximum oxygen uptake. The results published so far show that Norwegians generally have higher fitness than in all other countries that have carried out similar measurements at the population level.

The same database also show how the maximum stroke volume of men and women decreases with age. For example, a medium fit 20–29-year-old male heart pumps 21 milliliters of oxygen each stroke at maximum effort. This so-called maximum O2 pulse is only 11 milliliters per heartbeat in medium fit men in their 80s.

We have also used the HUNT3 Fitness Study to create models that make it possible to estimate your own fitness number without expensive equipment. Our most popular prediction models are the non-exercise based Fitness Calculator and Maximum Heart Rate Calculator, which you can read more about by clicking the links.

However, we have also made accurate models based on maximum and submaximum performance tests. The models are inexpensive and uncomplicated, and are convenient options for both recreational athletes and in health care settings.

One of our models lets you calculate your maximum oxygen consumption by pushing yourself to exhaustion on a treadmill. Start at a moderate speed and inclination and increase the intensity every second minute until you reach exhaustion. Then calculate your fitness number by using the gender-dependent equation below. The correlation between the model and true fitness number is almost linear.

You could also estimate your fitness number accurately by exercising at moderate intensity and adding your treadmill inclination, speed, heart rate and body weight into the following equation.

Do like six million others and find your fitness age with our Fitness Calculator.

Send us an e-mail:
cerg-post@mh.ntnu.no