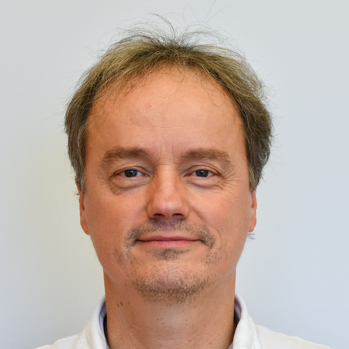 Professor
Department of Mechanical and Industrial Engineering
Faculty of Engineering

Amund Skavhaug, born 1965, has been working with industrial, embedded and real-time computer systems since his study at NTH in the eighties. His inner motivation is “to contribute to the development of other human beings, industry and the society in general”. He has in the last 10 years worked mainly, industrially and academically with “Remote Presence” systems, especially targeting wind-energy, industrial (wireless) networks as well as health and safety systems for homes. His main-focus now is possibilities and challenges in Industry 4.0.

Skavhaug started as a researcher in Sintef in 1996, later as an advisor and on project-bases. He was associate professor at the Department of Engineering Cybernetics, NTNU 1998-2016, working on embedded- and real-time systems. He was one of the starting group in “GründerStart”, the predecessor to “Start NTNU”, and has participated in several company start-ups since. The latest being Norsk Automatisering as (2009) and Emip AS (2015), where he is still CEO/CTO.

He has been main-advisor for more than 10 Ph.D. and 160 MSc candidates, as well as developed and taught tens of classes and laboratories.

He has participated/led several national and regional projects with industry and academia, such as: NFR BIA EMIP (Remote Presence), NCEI “The Rosetta Tranceiver”, RFF-midt “Next Generation Intelligent Sensor Networks”.

Skavhaug is very active in international organizations and is/has for example been General Secretary/Treasurer of Euromicro for many years, co-chair in the ERCIM working group on dependable software intensive embedded systems, participates in several working groups under EWICS TC7, as well as part of the program committees for many international conferences related to SW, HW, networks and safe computer systems. He has also arranged/contributed to arrange a large number of conferences and workshops internationally. Recently being both GC and PC for Safecomp 2016. (Which he also arranged, in Trondheim, see www. Safecomp.org.)

Skavhaug is civil.engineer from NTH and received his Ph.D. (dr.ing) in Engineering Cybernetics in 1997 from NTNU, with the title of the thesis “A holistic approach to development of dependable industrial SCADA systems – With emphasis on cost effectiveness”.

He has since fall 2016 been professor in Embedded Systems at MTP – NTNU.