More than seven million individuals all over the world have tried our Fitness Calculator. American health authorities recommend our calculator over other non-exercise models to estimate how fit you really are. You should test your fitness age too, by clicking the image below, but let us first explain what makes our calculator so special and popular. 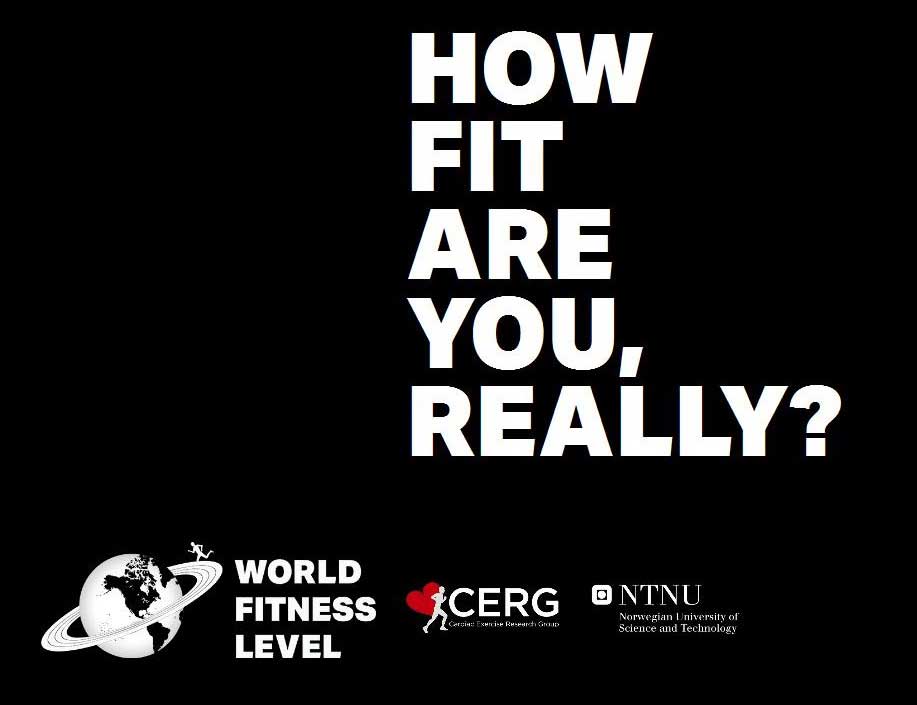 The Fitness Calculator estimates your fitness age measured as maximum oxygen uptake (VO2max). VO2max is the most precise measure of overall cardiovascular fitness. You can also find your own risk of dying early from cardiovascular disease, and we give you some ideas on how you can reduce the risk.

In 2007 and 2008, several thousand Norwegians tested their VO2max on a treadmill in The HUNT Fitness Study. They also answered several questions and had a complete health check-up as part of the third HUNT study (HUNT3).

Therefore, we could establish the most important factors for fitness among healthy women and men. These facors – namely age, waist circumference or body mass index (BMI), leisure-time physical activity and resting heart rate – are those included in the algoritm that constitutes our Fitness Calculator.

After we made The Fitness Calculator, we showed that the estimated fitness number is of great importance for how long you can expect to live. That's why we now recommend every physician to use the calculator to identify patients with high risk of lifestyle diseases and early death. We still use The Fitness Calculator in much of our research, and each study makes us even more convinced that the calculator is a very useful tool to prevent lifestyle diseases.

By use of the Fitness Calculator, we estimated fitness in 37,000 healthy individuals who participated in the HUNT1 study in the 1980s. We then followed them for 24 years and looked at health outcomes. The risk of dying from cardiovascular disease was 21% lower for each increase of 3.5 mL/kg/min, or 1 MET. This associations persisted after adjusting the analysis for confounding factors. The risk of dying from all causes during follow-up was also gradually reduced with better fitness.

Moreover, the number you get from The Fitness Calculator seems to be all you really need to estimate the risk of cardiovascular disease and premature death in presumably healthy individuals. We studied this in almost 40,000 participants from the HUNT study who were followed for up to 17 years. The calculator estimated the risk about just as good on its own as when traditional risk factors for cardiovascular disease are included in the model.

The Fitness Calculator doesn't only predict risk of early death. It also predicts a heart attack in middle-aged and older individuals. We followed 26,000 healthy women and men for 13 years, and for each 1 MET increased fitness, the risk of an acute heart attack was 11% lower in women and 3% lower in men.

We have also published results that link better estimated fitness to lower risk of atrial fibrillation. In women, each increase of 1 MET was associated with 16% reduced risk, whereas the corresponding risk reduction was 5% in men. Even increasing fitness over time seems to be beneficial to reduce the risk of atrial fibrillation. The results are based on data from 40,000 women and men who participated in HUNT3, of which 22,000 also had taken part in HUNT2 eleven years earlier.

We have also confirmed that the Fitness Calculator estimates fitness accurately in persons with established atrial fibrillation. During the HUNT4 Fitness Study, 652 men and women with atrial fibrillation performed a maximum oxygen uptake test, and we used this sample to validate the Fitness Calculator in this group of patients. In men, the calculator overestimated true fitness by on average 2.5 fitness numbers, whereas the difference was only 0.2 in women.

The main results of that research paper show that persons with established atrial fibrillation are at lower risk of early death and cardiovascular events the higher they score on the Fitness Calculator. The 25% with the highest age-ajusted fitness had 30–40% lower risk than those with the lowest estimated fitness. For each increase of 1MET, the health risk decreased by 12–15%. The study includes a total of 1117 men and women with confirmed atrial fibrillation, and we followed them for up to nine years.

Medium and high estimated fitness also predicts lower likelihood of having depression, as well as lower risk of getting depressed. The third of 26,000 middle-aged and older HUNT2 participants with the lowest fitness levels had 26% higher odds of having depression compared to the fittest third. Among 14,000 individuals who also participated in HUNT3 eleven years later, the risk of getting depression between the two surveys was reduced with around 20% in those with medium or high estimated fitness at HUNT2.

Read the full research article:
Cross-sectional and longitudinal association of non-exercise estimated cardiorespiratory fitness with depression and anxiety in the general population: The HUNT study

Moreover, we have shown that persons who maintain high estimated fitness and report low symptoms of depression over time have lower risk of dying during follow-up than those with low fitness and more depressive symptoms. The study is based on information from more than 15,000 middle-aged women and men from the HUNT2 and HUNT3 studies.

Those who maintain high fitness and those who improve their fitness have a 40-50% reduced risk of getting dementia compared to those who have poor fitness over time. Also, high fitness is linked to significantly reduced risk of dying from or with dementia. We have followed more than 30,000 men and women for up to 30 years, and estimated their fitness in both the 1980s and 1990s. The risk of dementia was 16% lower for every 1 MET age-adjusted increase in fitness between the two surveys.

Improved estimated fitness over time is also linked to higher brain volumes in middle-aged persons. 751 men and women aged between 50 and 67 years had their brains scanned as part of the HUNT3 study. The same persons also participated in the HUNT2 study eleven years earlier, and those who maintained high fitness or improved from low to high between the two surveys had bigger brains than those who stayed unfit.

Read the full research article:
Associations of Changes in Cardiorespiratory Fitness and Symptoms of Anxiety and Depression With Brain Volumes: The HUNT Study

Another study show that individuals with low estimated fitness have several-fold increased likelihood of non-alcoholic fatty liver disease. We found that the 20% with the lowest fitness had 17 times the odds compared to the 40 % with the highest fitness, even among individuals who sat less than four hours a day. Furthermore, among the 36 % who had non-alcoholic fatty liver disease in our cohort, the risk of dying within the next nine years was 50 % higher in those with low fitness according to The Fitness Calculator.

Unique database for the whole world

Answers from more than 730,000 healthy persons have made it possible for us to create a database on the fitness levels for people in different countries and on all continents. The database could – in combination with the Fitness Calculator – potentially be used by health services in all countries to identify population groups and individual patients with especially high risk of cardiovascular disease and other non-communicable diseases.

Some results from the database:

To measure your waistline, use a measuring tape around your waist at the level of your navel.

Physical fitness is very important for longevity and good health. The maximal oxygen uptake (fitness) is the most precise measure of overall cardiovascular fitness. Read more about the importance of good fitness here, and find out what are the normal values for people your own age.

Here we have gathered some general exercise advice. You could also try our 7 week fitness program, which is a fast and effective way to get fit.

What do we ask for in the Fitness Calculator, and why?

What do we ask for in the Fitness Calculator, and why?

We use this information only for research purposes, so we can compare fitness levels in different coutries, and among different ethnicities. Nothing of this is used in the algorithm.

Women's fitness values tend to be about 20% lower than men's, so gender matters a lot. Age is also important, and the older you are, the lower the oxygen uptake. We use height and weight to calculate body mass index (BMI), which also goes into the algorithm.

Maximum heart rate is a common means of denoting intensity for endurance training. If you don't know your maximum heart rate, our HRmax Calculator (integrated in the Fitness Calculator) can estimate it for you.

All these factors matter in a balanced way, but exercise intensity is the most indicative of fitness.

Both waist circumference and BMI can be used in the algoritm. The Fitness Calculator will be about just as accurate independently of which body composition measurement is used.

A low resting heart rate is a sign of a fit heart, and world-class endurance athletes use it to see if they’re ready for their next exercise session.

To use the calculator, you need information on disease activity over the past week. However, we have also made an alternative formula that can be used in case you don't have that information. This formula is available in the abstract of the research paper.

Read the full research paper in Medicine & Science in Sports & Exercise:
An Estimation Model for Cardiorespiratory Fitness in Adults with Rheumatoid Arthritis

Estimate your maximum heart rate with our simple and improved HRmax Calculator.

Send us an e-mail:
cerg-post@mh.ntnu.no