The E39 ferry-free project aims to eliminate all ferries along the coastal highway E39 in Norway. This route crosses several fjords which are characterized by great widths (up to 5 km) and depths (up to 1 km) where non-conventional engineering solutions will be necessary. One of the proposed solutions is the construction of a Submerged Floating Tube Bridge (SFTB), that, when built, will be the first of its kind worldwide. The Norwegian Public Roads Administration have made a promotion video concerning SFTB and the ferry free E39 project (NPRA promotion video).

A SFTB is also called an Archimedes Bridge which is essentially a buoyant tunnel that floats at certain depth in the water. This structural concept allows the construction of crossings with extreme geometric constraints like those found in a fjord. By placing the tunnel at a certain depth the water traffic is not disrupted, while at the same time, protecting the structure from most of the environmental loads. The SFTB has to be supported by floating pontoons or anchored to the seabed cables. These cables or tethers constitute the mooring system that holds the structure in a fixed position.

The dynamic behaviour of these mooring systems needs special attention. Changes in water level due to waves induce periodic vertical movements of the SFTB that translate into periodic changes in tension of the cables in the mooring system. The waves with longest wave periods have the potential to affect structures at greater depths. In particular, this is the case of swell waves that will affect the SFTB and its mooring system, even at considerable depths. This low frequency excitation might produce a parametrically excited system. Small parametric excitations might lead to parametric resonance or dynamic instability that causes excessive vibrations of the mooring cable and the SFT even at frequencies away from the natural frequencies of the system. This unstable response may introduce axial vibrations larger than those given in regular design. 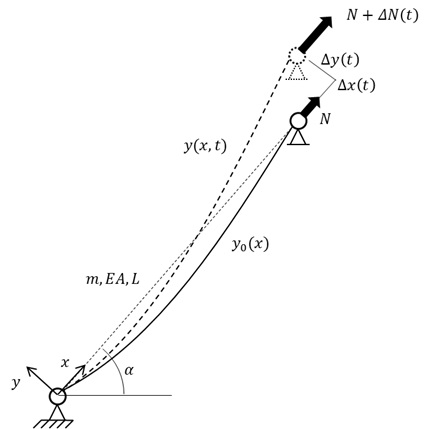 The structural dynamics group aims at developing a design approach for mooring systems under parametric excitation. This will be achieved tackling the problem in several ways. First, the parametric excitation of a mooring cable will be investigated analytically. Considering certain assumptions it is possible to define the equations of motion. The stability regions of the problem can then be described in terms of a closed form expression, by means of mathematical methods like the harmonic balance method. A careful definition of the assumptions and an in-depth exploration of the analytical solution will give insights on the relative importance of the problem’s parameters. Furthermore, the problem is also studied numerically. This allows for the definition of more complex cable configurations, as well as the inclusion of hydrodynamic effects (drag forces and added mass) and the consideration of current and wave loadings.

Due to the uncertainty associated with many of the system parameters, particularly those related to the wave loading, the investigations are treated within a probabilistic framework. Extreme value responses can be estimated using enhanced simulation methods developed at NTNU. These results will then in turn be used to study the system reliability and should lead to enhanced design procedures of mooring systems for SFTB.