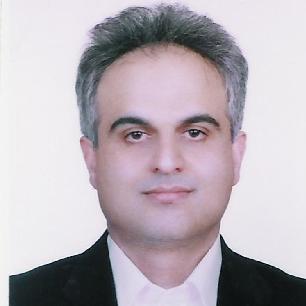 Biography: Hossein Nahavandchi holds a PhD degree (1998) from Royal Institute of Technology in Stockholm. His primary research interest is satellite Gravimetry, Altimetry and GPS. He has been lecturing in the Geomatics and Geodesy fields since 1990. Hossein’s career includes being a member of staff at Isfahan University (as Senior Lecturer and Head of Department), Royal Institute of Technology in Stockholm (as Research Associate), Tehran University (as Assistant Professor), and Norwegian University of Science and Technology (as Associate Professor and Professor). He also worked for Iranian National Mapping Authority and National Cartographic Center (NCC) in several functions. He has been Vice-Dean, Dean, and the Rector of the College of Engineering, Division Director, Chair of the Borad and Board member of Research and Planning Division, and Education Department in Iran.  His research projects and other activities in Civil Engineering have attracted more than 120 million NOK to the university sector since 1991. They have also resulted in a strong international network. Over 155 publications and presentations are the results of his research projects.

We use spaceborne observations from a novel remote sensing technique. The technique utilizes reflected signals of Global Navigation Satellite Systems (GNSS) and is called GNSS-Reflectometry (GNSS-R). The project aims to provide a regularly updated worldwide map of microplastics distribution on the ocean surface. The observations used in the analysis are collected using bistatic sensors onboard the NASA CYGNSS mission over the equatorial and part of the mid-latitudes regions. More than four years of GNSS-R observations are used so far. An overall verification of the results is performed using three available global microplastics models. The overall microplastic concentration map produced from GNSS-R observations shows a noticeably good agreement with the models. The promising results suggest that the GNSS-R technique can be an effective geodetic tool for the constant monitoring of microplastics on the ocean surface.

Remote sensing using the signals of Global Navigation Satellite System (GNSS) is an established method providing a new source of observations for the study of the Earth and its atmosphere. GNSS Reflectometry (GNSS-R), a novel Earth observation technique, exploits the reflected GNSS signals from the land or water bodies to retrieve information about different geophysical parameters. This technique, in ground-based, air- or spaceborne configuration, has been widely used and still is being pursued for a variety of applications over land, ocean and ice. Different processing approaches could be used or developed to retrieve unprecedented high spatiotemporal resolution scatterometric or altimetric measurements from the reflectometry observations.

Several GNSS-R sensors onboard small satellite missions have already demonstrated the feasibility and competence of this technique. Although NASA CYGNSS (CYclone GNSS) mission currently provides GNSS-R data stream over tropical regions, the higher latitude regions as well as Polar waters are yet to be covered.

The joint project of Norwegian university of science and technology (NTNU) with GFZ will investigate the theory and design of an Earth remote sensing sensor onboard small satellites capable of measuring the oceanographic parameters related to altimetry in Norwegian and Polar waters. The project exploits GNSS-R (Global Navigation Satellite System - Reflectometry) concept which allows to use a relatively cost-efficient low-power passive sensor in a compact payload onboard future NTNU SmallSats.

The project provides required information about the methodology and instrumentation of an observing system with different geophysical parameters of interest such as sea ice thickness, sea surface height and wave height. The outcome will be implemented in the NTNU SmallSats and will be used operationally in an integrated maritime/Arctic observation network. It is foreseen to use in-situ measurements acquired by autonomous unmanned vehicle systems for calibration and enhancement of the GNSS-R products. The ultimate goal is to integrate the designed GNSS-R sensor in an integrated observation network to provide a high spatiotemporal resolution monitoring of the arctic and oceans, as the key components of the Earth’s climate system. 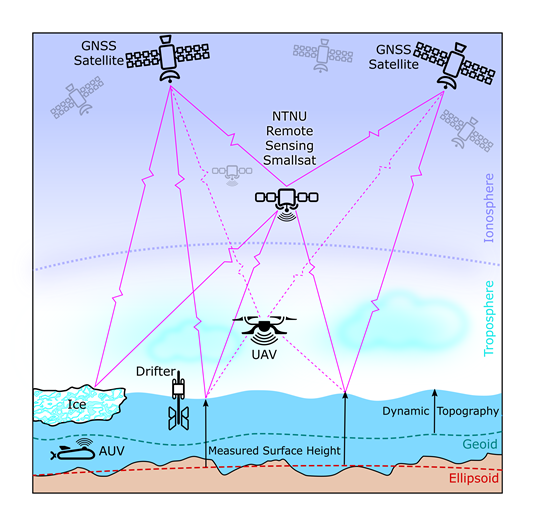 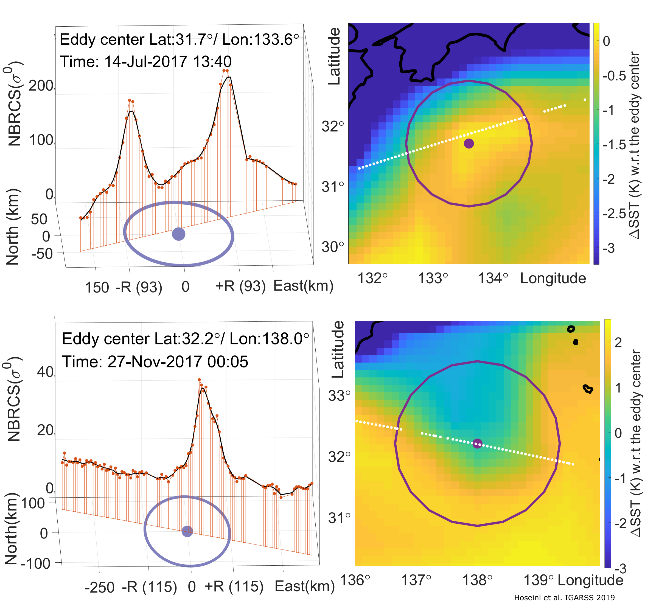 Groundwater is a strategic reservoir and its shortage will cause the next global crisis. Water resource issues are often very complex and frequently require large amounts of diverse data. Collection of data by traditional means (e.g. fieldwork) can be quite difficult at times, especially in remote areas, as well as costly and resource intensive. The Gravity Recovery and Climate Experiment (GRACE) satellite  gravity data can be very useful providing a cost-effective means of replacing or complimenting field data collection. GRACE satellites measure monthly changes in total terrestrial water storage by converting observed gravity anomalies into changes of equivalent water height. We use this methodology to process GRACE satellite-to-satellite tracking data to estimate groundwater depletion in the Middle East and a developed methodology to use GRACE data with enhanced spatial scale over Iran’s water basins. We remove leakage-in mass signals of the Caspian Sea and adding back the ocean model contribution that had apparently introduced a spurious positive trend over the Black Sea. To isolate the groundwater contributions, we develop a local hydrological model including soil moisture, snow, canopy, and river storage and subtract it from the GRACE total water storage results. 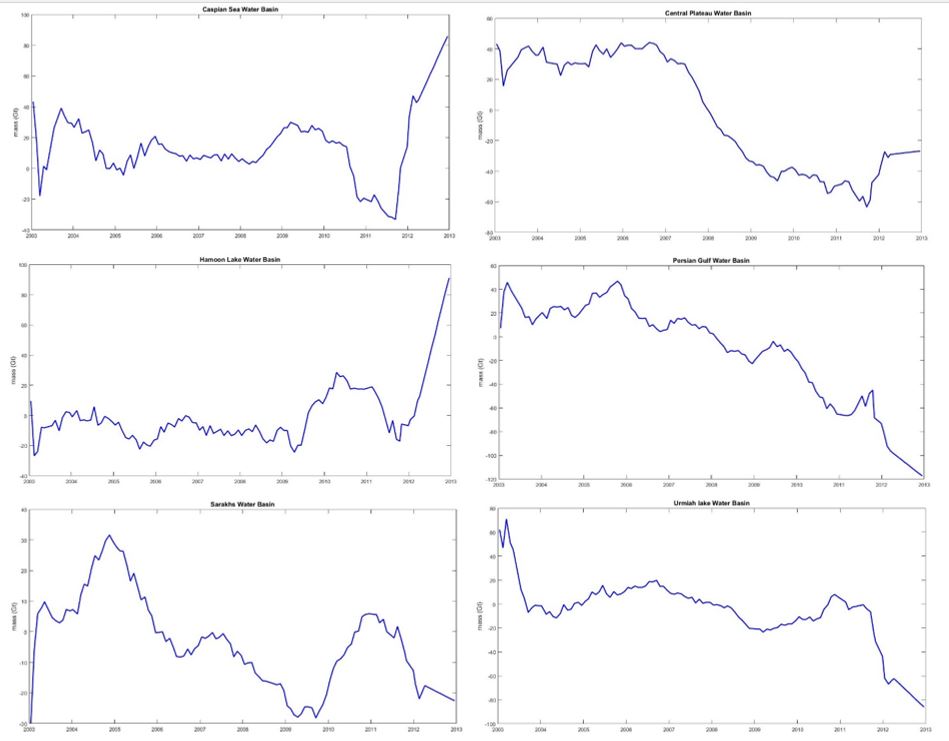 Land subsidence due to the overdrafting of groundwater resources for industrial and agricultural purposes is a geological hazard that affects many urban and agricultural areas in the world. Several environmental effects and consequences are associated with land subsidence including damage to infrastructures and buildings, increased risk of flooding in coastal areas and accelerated erosion along Earth fissures and drainage systems. Monitoring the spatial extent and temporal evolution of surface deformation associated with fluid withdrawal is critical to mitigate hazards associated with this phenomenon. Among ground and space-based geodetic methods used for measuring land subsidence, space-borne InSAR enables a unique imaging capability for the assessment of subsidence in response to fluid extraction from subsurface reservoirs. Using SAR data from the ENVISAT, ALOS and Sentinel-1 satellites, we analyzed nearly a decade of land subsidence in the Rafsanjan region in Iran. An InSAR time-series analysis showed a persistent pattern of subsidence, with peak values found west of the city of Rafsanjan. 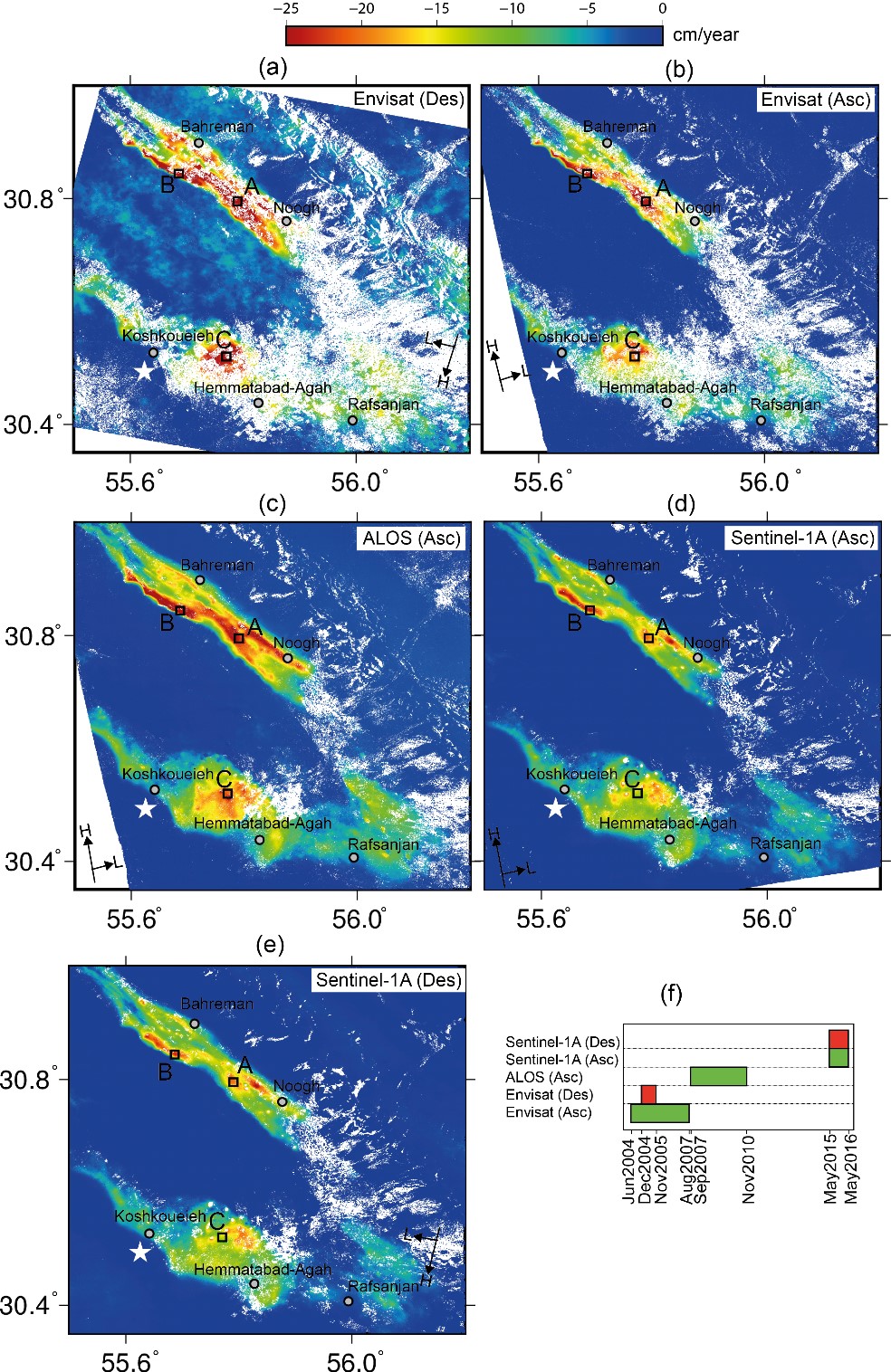 We have also worked on large-scale national high-quality SAR monitoring of Norway. As an example, an interferogram over Norway has been shown in Figure below. We are working with ionospheric and tropospheric corrections.

Standard methodology of the SAR and InSAR technique in displacement mapping has been improved. We implemented a polarimetric optimization approach on Sentinel-1 dual-polarization (VV–VH) images to improve the standard persistent scatterer interferometric synthetic aperture radar (PS-InSAR) method. Combining persistent scatterers (PS) and distributed scatterers (DS) is important for effective displacement monitoring using time-series of SAR data. However, for large stacks of SAR data, the DS analysis using existing standard algorithms becomes a time-consuming process. SqueeSAR is an approach for extracting signals from DS. We optimized this technique and evaluated the performance of our approach on 50 Sentinel-1 images acquired over Trondheim in Norway. We have made the SqueeSAR selection algorithm 98% more efficient and more robust in the case of few images. We implemented our approach in the StaMPS/MTI processing chain to deliver a time-series of combined PS and DS more efficiently than the existing StaMPS/MTI combined algorithm. 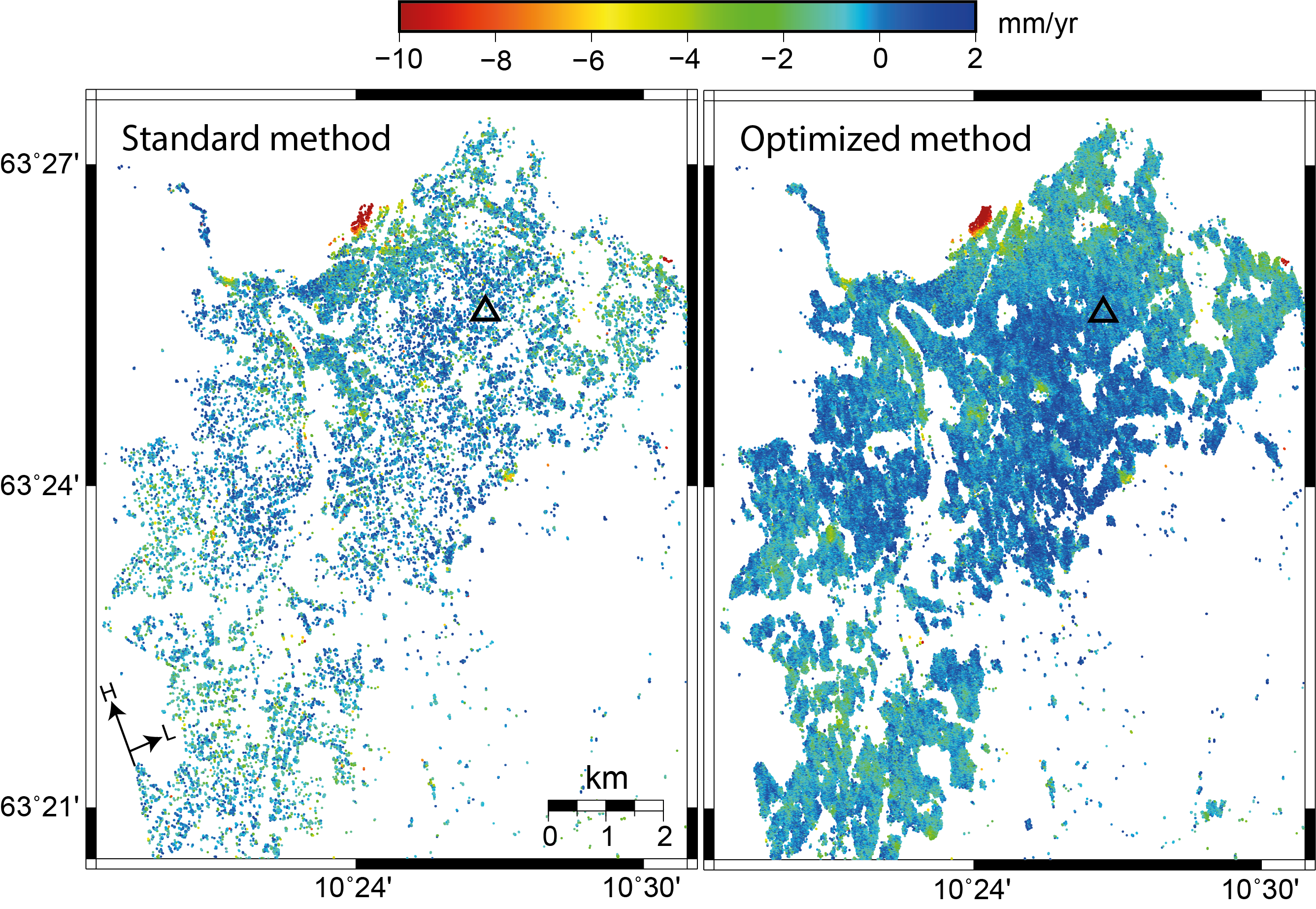 Quantifying water vapor, a major greenhouse gas of the atmosphere, is necessary for the climate and meteorological applications. Global Navigation Satellite System (GNSS) signals are promising measuring tools for monitoring water vapor content, but the use of GNSS products for estimating climatic trend requires homogeneity assessment in order to increase reliability and accuracy of the results. We have developed a data homogenization method based on singular spectrum analysis as a subspace-based technique. The ERA-Interim simulated data has been selected as the reference dataset.  After homogenization, we used Principle Component Analysis (PCA) method to extract climate signals. We employed our developed technique over 214 permanent GNSS stations over Germany between 2010 and 2016 (7 years). 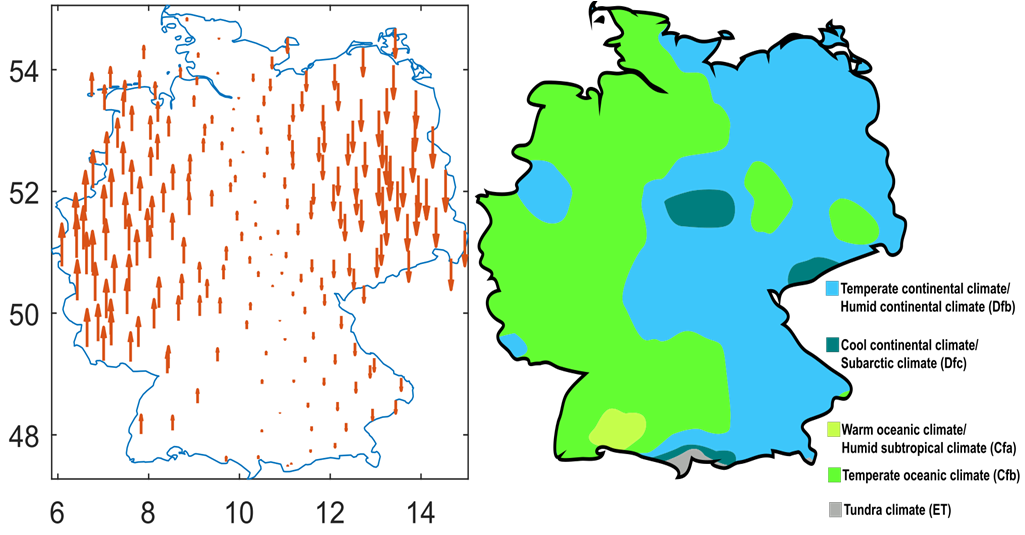 Accurate forecasts of wave conditions are of the utmost important to all who live, work, or travel on or near ocean. To improve the wave prediction models, field measurement of ocean wave parameters is necessary. Those parameters are wave height, period and direction. We applied a methodology to derive ocean wave parameters (wave height, wave period and direction) from GPS data. The power spectrums of GPS data (among its errors) and buoy movement (excited by ocean wave) were the basis for the estimation of wave parameters. Because of the buoy movement data is in the band frequency of GPS data which signal to noise ratio (SNR) is very low, the most important point in design of high pass filter is the cut-off frequency selection of the filter. The figure below shows the power spectrum of the GPS height data in m2/Hz.

The Gravity Recovery and Climate Experiment (GRACE) satellite mission provides temporal variations of Earth gravity field with a period of around one month. GRACE measures changes in Earth's gravity field caused by regional shifts in the Earth's mass, including ice sheets, oceans and Water stored in the soil and in underground aquifers. We used GRACE data to estimate the rate of ice mass variability over Greenland. The Figure below shows monthly ice mass changes summed over the entire Greenland ice sheet, between April 2002 and February 2010, estimated in Gigatonne grom three GRACE data sets released by GFZ (Potsdam), JPL(California) and CSR (Texas). Note that this plot shows deviation from the average ice mass over the 2002 to 2010 period. It does not mean that the ice sheet was gaining ice before 2006 but that ice mass was over the 2002 to 2010 average. The ice mass was below the 2002 to 2010 average after 2006. The trend of the best fitting straight line for CSR data is -163±20 Gigatonne per year. The results also indicate the the ice-mass loss rate has been increasing in the time period between 2002 and 2010.

The Ocean plays a key role in determining the global climate. To develop techniques for pridicting furure climate, one must undrestand the dynamics of the global ocean circulation. A viable approach to observing the global and regional ocean circulations with sufficient resolution is the use of a satellite radar altimeter to measure the Mean Sea Surface (MSS) height. Multiple radar altimetry data from ESA satellites of ENVISAT, ERS-1 and ERS-2 and NASA satellite of GFO were used to determine the NTNU MSS model. NTNU MSS model is used to derive the mean dynamic topography and the ocesn circulation as it is shown in the Figure below. This plot shows the surface currents system in the North Atlantic and the Arctic sea for the time period 1993-2007. Flow of warm water is shown as red arrow and cold water as blue arrow. The Northward flow of warm water in the North Atlantic is partly balanced by southward flow of clod water in the East Greenland. Note that the detalied surface currents are not shown in this picture.