For most of the twentieth century tin was fundamental for both warfare and welfare. The widespread use of the tin can created a revolution in food preservation and helped feed both the armies of the great powers and the masses of the new urban society. Tin deposits were however found in only a few regions of the world, predominantly in the southern hemisphere, while the main centres of consumption were in the industrialized north. The tin trade was therefore always a highly politically charged economy, in which states and private enterprise competed and cooperated to assert control over deposits, smelters and markets.

Aluminum Ore: The Political Economy of the Global Bauxite Industry 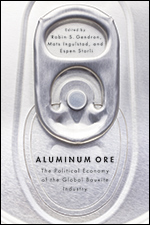 As the key component in aluminum production, bauxite became one of the most important minerals of the last one hundred years. But around the world its effects on people and economies varied broadly -- for some it meant jobs, progress, or a political advantage over rival nations, but for many others, it meant exploitation, pollution, or the destruction of a way of life.

Aluminum Ore explores the often overlooked history of bauxite in the twentieth century, and in doing so examines the social, political, and economic forces that shaped the time. Its development became a strategic industry during the First World War, and then the subject of international struggle for dominance during the Second World War. Yet in post-war years it was globalization, not military conquest, that expanded global value chains. The extraction of bauxite -- a mineral found mostly in the developing world -- was made profitable by the growth of multinational corporations and the spread of globalization, leaving behind a troubled cultural and environmental legacy.

Dr Andrew Perchard’s 2012 book explores the evolution of the UK aluminium industry, including the close relationship that developed between the leading domestic producer and the British Government.

‘BACo and its successor companies in Britain are well analysed by Perchard and shrewdly located in their political and environmental context. A valuable, well-researched book which is both very readable and well worth reading.’

From Warfare to Welfare: Business-Government Relations in the Aluminium Industry

From Warfare to Welfare: Business-Government Relations in the Aluminium Industry was also published in 2012. Co-edited by Dr Mats Ingulstad, it features essays from a number of HSRMI members, providing transnational comparisons of the relations between the aluminium industry in a number of nation states and governments over the course of the Twentieth Century.

Espen Storli on the Aluminum cartel in Business History Review, 2014

Mats Ingulstad on Raw Materials and US foreign policy in International History Review, 2014.