In relation with the 6th International Footbridge Conference in Berlin in September 2017, three unique designs for a footbridge on a specific site in Berlin was developed by PhD candidates in the CSDG group and master students at the Department of Structural Engineering, NTNU. This years conference has three different themes; footbridges for Berlin, debates on the participants former work and dynamics and innovation. The footbridges are not part of any competition of sorts, neither are anyone intended to be built, but they will be a part of a special conference proceedings collecting ideas from leading experts in the field. During the conference, all contributions will be presented and discussed.

Our focus in this bridge project competition was on the methodology of the design, rather than the structure itself. The Wiesen location was chosen more or less randomly form the proposed locations. The approach to the design, which is presented below, would be similar for every other location proposed by organizers. Although the final product, namely bridge, could be significantly different.

The main purpose was to present the idea of how the conceptual phase can be accomplished, rather than create beautiful bridge, which was a secondary goal. As opposed to the existing common approach, were the conceptual phase is realized mostly by the architects, our group engages cooperation of both architect and engineer from the very first draft. We strongly believe that, thanks to the development of computational tools, we can implement structural basis in the conceptual stage of the design. 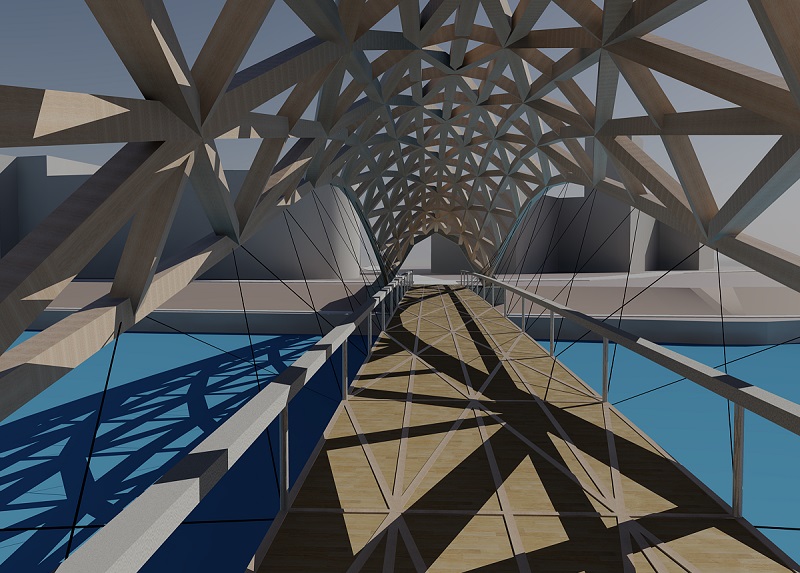 This spring, four master students wrote their thesis on footbridges, and are attending the Footbridge conference with their contributions.

The bridge is located between the Berlin downtown districts of Kreuzberg and Friedrichshain, over the river Spree with a width of approx. 110 m. The main focus of the bridge was to accentuate the remains of the old Brommybrücke for pedestrians, in addition to giving a good view of the old Berlin Wall. It was also considered important to get cyclist from one side to the other separately from pedestrians.  Two separate decks were chosen to prevent larger groups of pedestrians pausing to view the pylon to interfere with bicycle traffic. The 134 m long pedestrian deck spans the Spree in a straight line, while the cycling deck has a total length of 162 m due to both vertical and lateral curvature. There are also staircases leading down to the existing pier. Structurally, the two separate decks work together as a seesaw; if one deck experience high loading, the other deck’s stiffness counteracts the loaded deck’s deflection. 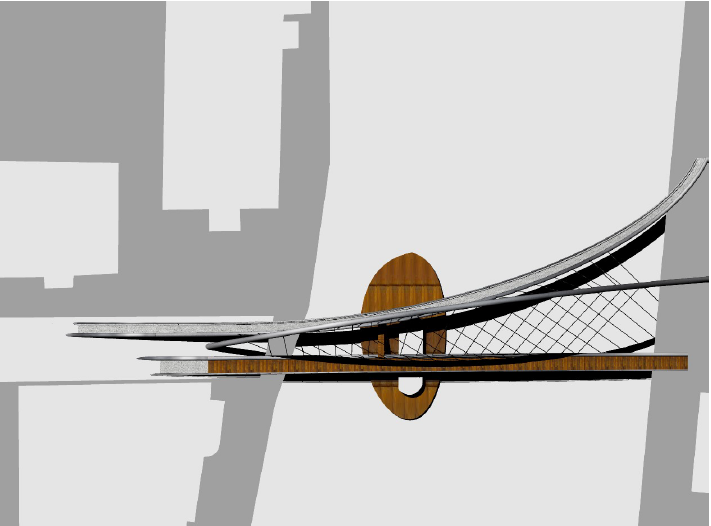 Brigde Tethys by Christian Due Lind and Kasper Hagestande

The 66 m long bridge is crossing the river Spree, linking the two river banks Rolandufer and Littenstraße in the north and Märkisches, Am Köllnischen Park and Wallstraße to the south. The goal was to design a, to the eye, dynamic bridge devoid of vibrations. The bridge is divided in two separate lanes by a concrete construction along the bridge. The concrete construction transfigures into a bench in the mid-part of the bridge, making it possible for pedestrians to take a break and enjoy the river Spree without interfering the cyclists. The bridge is parametrically optimized such that the deflection and forces in the arches are limited. Since the arches are not braced against wind, clamped supports are needed to withstand tilting. 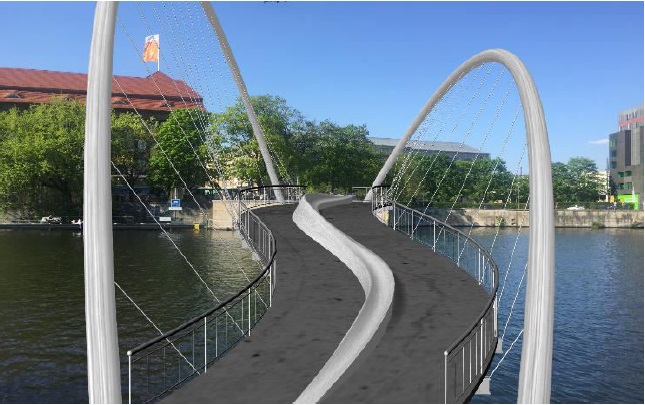