– Article based on a Group Dialogue 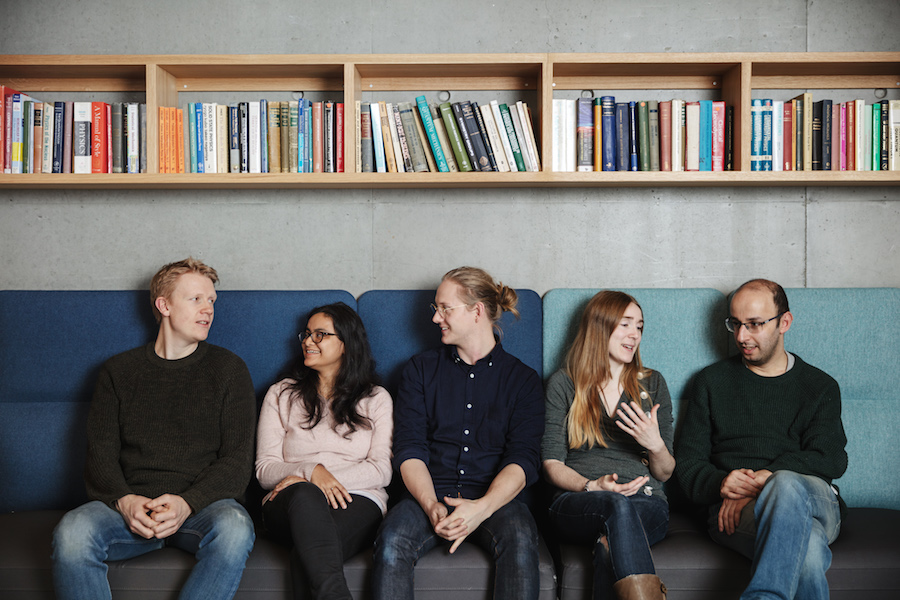 What is the definition of success early on in a project or organization? For many, it might be a significant milestone reached or an epic breakthrough. However, what if you look more deeply? If you take that approach with the QuSpin center, you’ll find a clear winner if you speak to those involved – connection.

When you approach the unassuming door to the QuSpin center and enter the quiet hall, there is an immediate sense of ease and purpose. The seeming stillness masks a hive of activity going on inside. The team is working hard to blend the two major facets of physics, and different interdisciplinary specialties, into a unique environment of cultural understanding and professional collaboration to drive spintronics forward.

The professional collaboration side, which one expects at a center such as this, is bolstered by the organic diversity in the team members. During lunch in the QuSpin room, you can see this perfectly illustrated in the blend of topics of conversations and by the faces filling the comfortable room. You’ll find those who are fixtures, those who’ve left and returned, and new faces drawn in by this compelling work and excitingenvironment.

It was here that Sol H. Jacobsen, Alireza Qaiumzadeh, Payel Chatterjee, Håkon Ivarssønn Røst and Haakon Thømt Simensen sat down to talk about the center and why this is the place they, and others, should want to be.

Collectively, and with candid honesty, they openly spoke about how what they do is a challenge as they work on the basic research being done, and writing new chapters in the field of physics and spintronics as they go. It cannot escape anyone listening that there is another driver behind all this which is far more personal and one that is helping change the face of academia - their own histories and social interactions with each other.

All but one are the first in their immediate families to hold a Ph.D. and for most, to be in scientific research. In the QuSpin center, they are surrounded by like-minded and focused peers. However, given there are twelve countries represented in the mix, it is the activities that have them going for meals, having game nights, and a Journal Club for example, that allow them to experience each other in a meaningful way outside of their work, yet still fueling it.

Theoretician Haakon Thømt Simensen sees the center as a superorganism, where what each member is doing is of benefit to someone else, and putting time into helping each other is worth it. Theoretician Sol Jacobsen cites the various activities that the center encourages, and the newcomers which excite the creativity and interactive enthusiasm. “There are generally more initiatives, and everything is adding something extra.”

There is an insatiable curiosity in the people here that is both in work and, by a happy by product, in those around them. The group heartily agrees this pushes them forward to do more and keep at it, even when things get hard.

One of the initiatives at the center is the SpinMaster of the Week. It is one individual who is responsible for the QuSpin room, the heart of the center, and keeping it tidy, organizing a special treat on Friday and generally looking after the wellbeing of the space. It provides a sense of ownership and connection to what otherwise could be another room.

On the professional side, this idea of connection sees theoreticians and experimentalists working side-by-side to advance the field of spintronics, even when they don’t exactly understand what the other is doing or sometimes saying, in a way which is something of a novelty in the field. No more is the isolation of specialties inside this space. It is a quiet sentiment, almost a background note, that this is the new norm and a welcome one.

Ten years ago, Alireza Qaiumzadeh, came to NTNU. Before coming to NTNU, when studying in his home country of Iran, he learned a valuable lesson which only backs up his opinion of the necessity of this blended environment at QuSpin. Qaiumzadeh took classes which were not part of his specialty to have a broader base for working from in his area of focus. “It has become a way of life here, a habit, to learn and listen to different topics in physics and not only our specific topic,” explains Qaiumzadeh. He remembers the time when it wasn’t so and that he was part of what he considered a ‘Norwegian’ research team as opposed to now being part of a world-class team made from global representatives.

Håkon Ivarssønn Røst, having the two disciplines sitting side-by-side (he shares an office with three theoreticians) to push the science forward and one other is a particular characteristic, which made NTNU win out over the adventure of working abroad. “For some reason, I stayed on, but what is that big reason? I had a lot of fun doing my masters here with my supervisor. I would point to that first.” Røst explains, “I also had an excellent offer with a collaborator; we have similar facilities, but having this opportunity here characterized by having one common and well-defined focus (beyond condensed matter physics in general) that we have with spintronics, so if one is to point to any differences, then that is the obvious one."

For newcomer Payel Chatterjee, is an example of how the center is drawing in talent that is passionate about the whole concept. Chatterjee is the first academic in her family, and QuSpin provided the opportunity for her to make her first voyage outside her native India and do what is uncommon for young Indian women; live and work independently. Although still a challenge, what could have brought a significant culture shock, if not environmental, has been counteracted by the fact she feels right at home. “I want to know how Europeans do things, how they research,” she says, “…but the hunger to explore new things, this brought me here.” She speaks to the fact that the personal environment, the seamless blend of twelve nationalities around her, makes her part of something that doesn’t leave her feeling foreign at all. She also thinks that being here in the very start means she will be contributing to something in a way that is deeply meaningful and unique to being herenow.

Haakon Simensen, a prior master student at NTNU, says it was an education he came for and then the opportunity he couldn’t resist that made him stay. This opportunity to connect with his own intuitions and with those around him gives him the chance to understand things in a face- to-face manner. “Reading another’s paper outside your field is often not that illuminating. Most often than not, it isn’t illuminating at all.” The group shares a laugh in acknowledgment. “You find yourself sitting there thinking, I didn’t understand anything of that, but here you can ask those inside that field, and they can explain it to you, and that is what I really like about having so many people around doing separate, focused things.”

Sol Jacobsen, a four-year veteran of the department, didn’t intend to end up in physics. “It was only in my last year when I had to pick my specialization project that I chose something that was really, really interesting in quantum theory and I got bitten by the bug.” Jacobsen recounts, “I took a year off to consider my options. I was a science teacher in Nepal and interacting with those kids who didn’t have an option to do a Ph.D. in physics, and I thought if I have the opportunity to do this, I should try it.” She stuck it out and found herself with a Ph.D. and a further postdoc position. It was the pull of coming home to Norway, after many years away, and QuSpin offering her an environment which continually fosters interest despite how hard and demanding it is, that she is still here. Like most who have not yet become a professor, she still finds herself evaluating, from time to time, if it is still interesting enough? But she smiles as she says, “It still wins. It is such a good center to be part of that all of the hard things aren’t hard enough to make me stop.”

The center might be walls, doors, laboratory work and such, but to sit with its people is to know that it is so much more. It is the passion, curiosity, integrity, and comradery that fuels and pushes these researchers past the hard part, the not knowing, and towards building the foundations that tomorrow’s innovations will be built. It might not happen overnight, but rest assured this dynamic group of people will reshape our knowledge of spintronics and watching them will never cease to be fascinating.