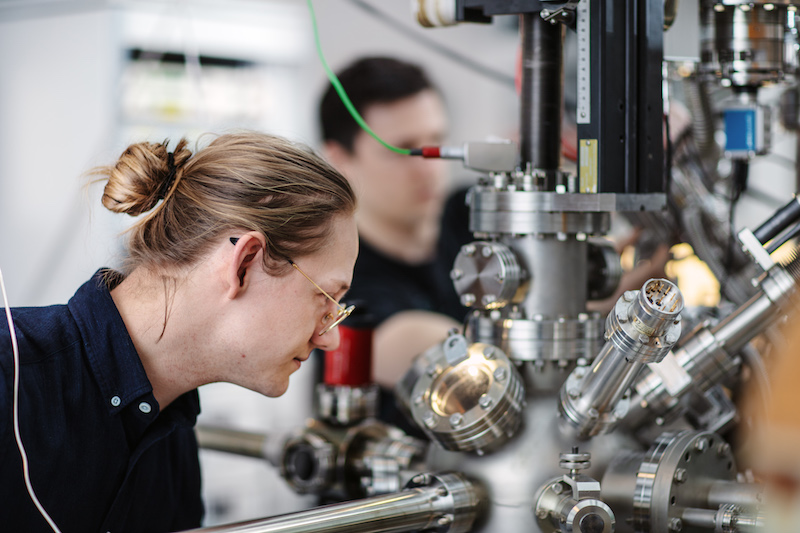 Our focus is to develop frontier knowledge in both theoretical and experimental disciplines.

Nanoscale engineering facilitates the creation of new materials and material combinations where the electron spin and other quantum variables behave and can be controlled in new ways. We want to unravel the intriguing properties of these novel systems to further our understanding of quantum physics and enable new uses with less energy loss in electronic devices.

We are building up two new labs with advanced equipment.

We want to be able to verify the theoretical models through experiment, as well as growing new materials with unprecedented and superior properties for transport of electric signals across longer distances.

The synergetic interplay between theoretical developments and experiments will open new doors for the understanding and utilization of the bizarre nature of quantum physics in devices.

The primary goals are to provide experimental competence to support the theoretical activities within QuSpin, to produce research contributions in important and topical fields, and at an internationally respected level. We also strive to bring interesting and up-to-date research work into the undergraduate classroom, to educate Master students, to contribute to the career development of young scientists and to enable high-quality Ph.D. theses to be produced.

Our research predominantly focuses on the interaction of electrons (especially their spin) within a solid. For example, the coupling of electrons with each other (mediated by vibrational waves or spin waves) can give rise to superconductivity, which allows an electrical charge to move without any losses. Unusual forms of coupling between spin and charge allow the efficient conversion of electrical signals into low loss spin signals - and this can also open new avenues for low loss (or lossless) signal transmission, storage, and manipulation. Finally, quantum confinement of charge and spin lies at the heart of the fas developing field of quantum computing.

Most of the methods we use come under the category of “photoelectron spectroscopy” and are based in Einstein’s photoelectric effect, for which he received the Nobel Prize in 1921. Using a refinement of this effect, it is possible to understand chemical bonding within a solid (a discovery which earned Kai Seigbahn the Nobel Prize in 1981), and more recently,it has also been shown that the same method can reveal the spectral function (closely related to the electronic band structure). Furthermore, this information can be resolved by energy,momentum, and spin and the newest instruments also facilitate good spatial resolution. We operate two instruments at NTNU which are based on various refinements of this method. We also make significant use of similar instruments at international synchrotron radiation facilities. In 2019 we will purchase and install a state-of-the-art spin-resolved photoelectron microscope to extend the range of possible measurements at NTNU.

The  highlights of the team of Justin Wells in 2018

This included studying the ubiquity of Dirac cones and topological states in transition metal dichalcogenides, many-body physics in graphene, growth of patterned structures of graphene, and the simultaneous quantization of the valence and conduction bands in a prototype quantum computer structure. This work has involved collaborations with the Shanghai synchrotron MAX synchrotron, the Swiss Light Source, and with research groups in Aarhus, St. Andrews, London, Lund, Basel and elsewhere.

The focus for 2019 is on building up a new ARPES lab that will give QuSpin the resources to highly advanced experiments in the years to come. 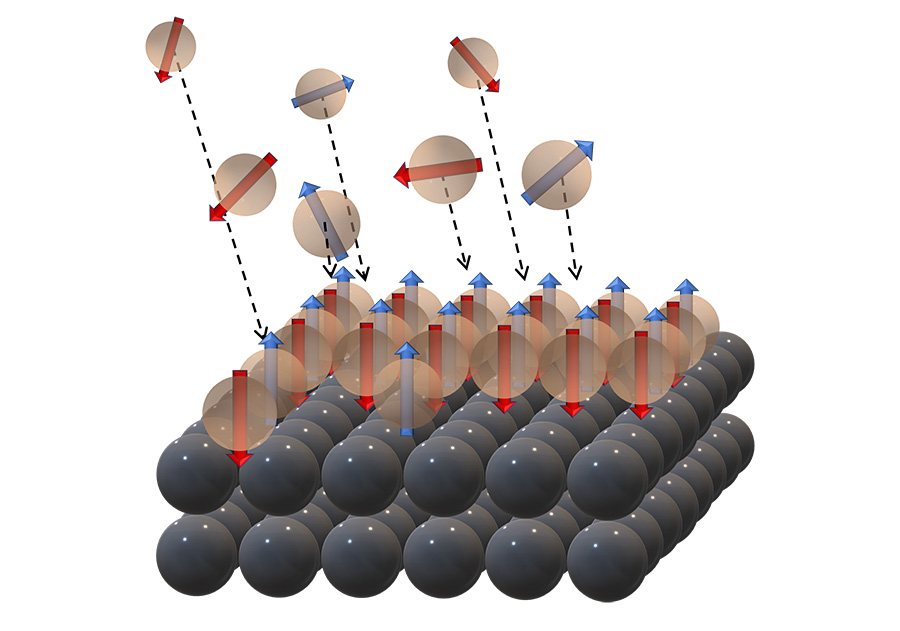 The QuSpin molecular beam epitaxy (MBE) group is a new experimental group that is still in the build-up process. Our primary goal is to develop the synthesis of new high-quality materials with potential for spintronics research and application. Our primary method to achieve this goal is called “molecular beam epitaxy.” This technique uses an ultra-high vacuum environment to guide atomic or molecular beams onto a target, where a crystalline layer will grow. Using this method, we can create very high-quality crystals with thicknesses down to a single atomic layer. It is also possible to combine different materials to create new physical properties and control them in detail or to create nano-objects like quantum wires and quantum dots.

Our initial research will revolve around the growth of so-called antiferromagnetic semiconductors and helimagnetic materials. Antiferromagnetic semiconductors are central to our research since they combine the potential for new spintronics applications with the possibility to manipulate the material characteristics by using electric fields (similar to today’s semiconductor technology.This would enable the integration of established semiconductor technology principles and spintronics applications. Our research in this part will therefore focus on developing the growth of suitable materials, in which we will search for ways to manipulate and use their spin properties.

Helimagnetic systems will be the second research area of our group. These materials are very interesting because of their complex magnetic structure. They can host for example so-called ‘Skyrmions’. These are, simply said, stable magnetic whirls inside the material and are promising due to their potential as nano-objects for future low energy memory devices. We will develop the growth of materials that host helimagnetic or skyrmionic structures even at room temperature and which are therefore interesting for room temperature applications.

Using MBE growth for magnetic materials will enable us to create, control and investigate new, high-quality materials that can be used in spintronics research and applications. Furthermore, the control down to single atomic layers will enable us to tailor the material properties such that we can enhance important characteristics or even create new ones. We will use this to search for model systems, which can for example realize the properties found in QuSpins theory groups, as well as develop materials with relevance for device application. 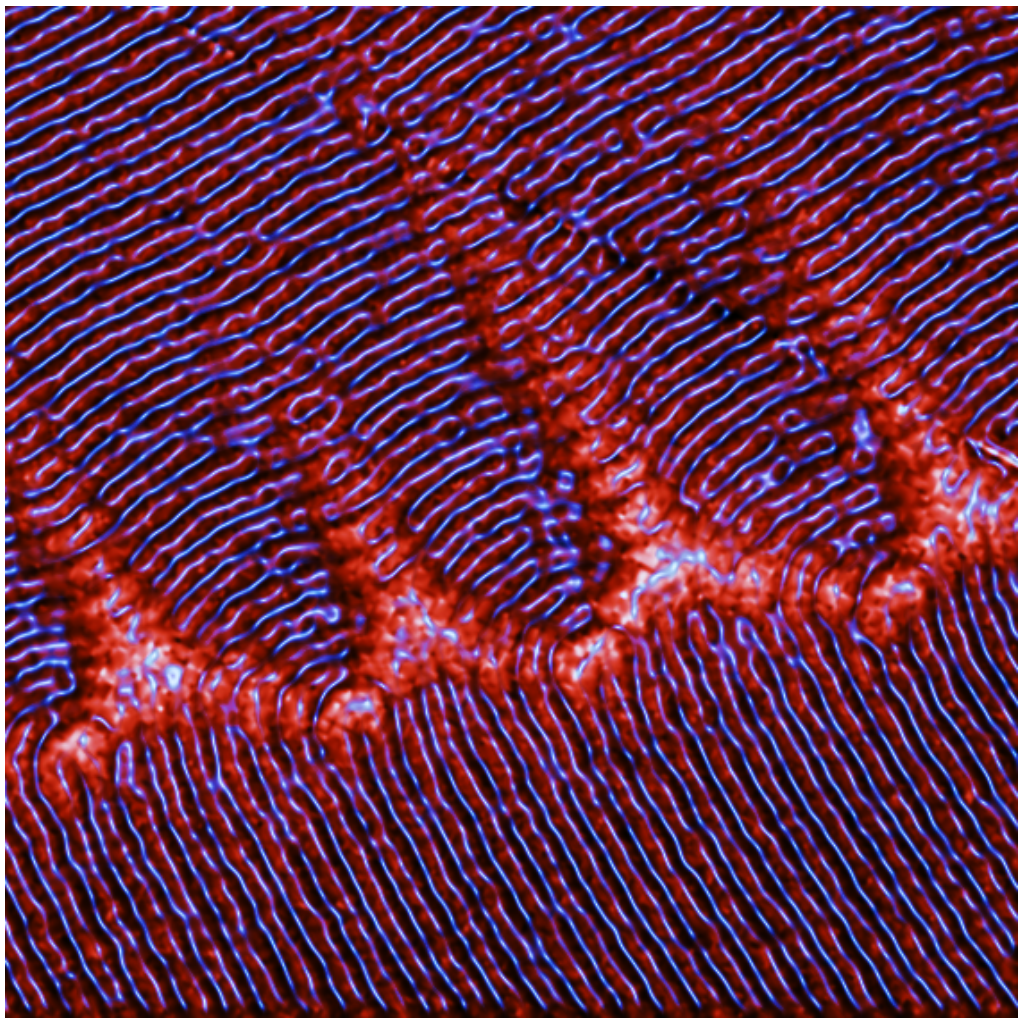 The intriguing functional properties and nanoscale physics of magnetic skyrmions led to an explosion of interest in topological spin textures. Skyrmions are stable magnetic whirls that give rise to emergent electrodynamics, and their position and motion can be controlled at ultra-low energy costs. Due to these outstanding properties, skyrmions hold great promise as functional nano-objects for future spintronic devices including next-generation racetrack memories.

Up to now, either skyrmion lattices or skyrmions in a ferromagnetic background have been investigated. With our experiments, we have revealed that a much larger zoo of topological spin textures exists - even without the external magnetic field usually needed to stabilize skyrmions. In particular, we have observed that topological spin textures occur naturally in domain walls of helimagnetic order. These domain walls are distinctly different from conventional domain walls as encountered, for example, inferromagnets. Instead, they share strong similarities with grain boundaries of liquid crystals as they can possess a microstructure best described in terms of dislocations and disclinations. In contrast to liquid crystals, these crystalline defects also correspond to topological spin textures and are endowed with an additional functionality.

The goal of our research is to identify and demonstrate novel topological spin structures in chiral magnets that can be manipulated at ultra-low energy and allow device paradigms to be extended into new realms of magnetism.

Our research explores functional properties in completely new types of topological spin textures, such as magnetic disclinations and dislocations, and helimagnetic domain walls. By applying state-of-the-art imaging methods, such as magnetic force microscopy, we aim to create fundamental knowledge about the physics of such spin textures: For example, we want to understand their formation process, topology-driven properties, and interactions. Furthermore, we study how electrical currents and magnetic fields control the position and movementof individual spin textures and investigate the dynamical nanoscale response. Ultimately, we want to understand if it is possible to utilize the new degrees of flexibility offered by the different topological spin textures to design next-generation spintronics devices.

The primary goal is probing and understanding physics at the atomic scale. The primary method for this is through developing scanning probe techniques and experiments that provide insights into the fate of charge and spin in materials.The short scale goal is to explore the magneto-electronics and magnonics of oxide materials and antiferromagnets. The longer-term goal is to develop STM based point-contact techniques to explore mesoscopic and magnetodynamic physics at a very local scale.

We want to develop STM -based point contacts as a local characterization tool down to the nm-scale for studies of charge transport, excitations and dynamics at low energies. And to understand and control the magnetostatic, magnetodynamic and magnetotransport properties of perovskite magnetic oxides.