The Prevention of Allergy among Children in Trondheim (PACT) study

The Prevention of Allergy among Children in Trondheim (PACT) study

Secondly, the PACT study aimed to assess the effectiveness of this intervention on the development of allergic related diseases in childhood, such as atopic dermatitis (AD), asthma and allergic rhinoconjunctivitis (ARC).

Objective: To study the efficacy and effectiveness of a structured intervention aimed at primary prevention of asthma, AD and ARC in small children.

Design and method: PACT is a controlled, prospective, population based intervention study in primary health care. Randomised implementation of the intervention was not feasible and therefore a modified controlled design was employed following the Transparent Reporting of Evaluations with Non-randomised Designs (TREND) recommendations.

Intervention and setting: The intervention was implemented into primary health care centres across Trondheim, Norway, in June 2002.  It consisted of structured advice provided to pregnant women and parents of small children up to 2 years of age and aimed to reduce environmental tobacco exposure, improve indoor-climate by reducing housing dampness and increase intake of omega-3-fatty acids.

Data collection and outcome measures: Questionnaires on heredity, environmental exposure, diet and on health and diseases as endpoints were collected consecutively from pregnancy, at 6 weeks, and at 1, 2 and 6 years of age. Additionally, these questionnaires provided parentally reported information regarding the children's health and the presence of allergy related diseases in particular. The control cohort also includes a survey of occurrence of allergy related diseases through questionnaires and clinical examination on allergy related symptoms at 2 and 6 years of age.  The primary outcomes of interest were the prevalence and extent of exposure to the risk factors targeted in the intervention and incidence of asthma, AD and ARC.  The control cohort served to both track fluctuations in risk factor levels over time, and to provide comparison data to study the efficacy of the intervention on risk factors and effectiveness on the incidence of allergy related diseases.

Effects of altered exposure
The effectiveness of altered exposure to tobacco exposure, indoor climate and diet during pregnancy and infancy on the incidence of allergy related diseases at 2 years of age is also published(2). We found a significantly lower incidence in parental reported doctor diagnosed asthma and use of asthma medication at 2 years of age in the intervention cohort compared to the control cohort. The reduced incidence for both asthma and the use of asthma medication was observed among girls. There was no significant difference in the incidence of AD and wheeze between the intervention and control cohorts, and similarly no difference was observed when the groups were stratified by sex. Reduced environmental tobacco smoke and increased intake of oily fish during pregnancy and early childhood may be effective in reducing the incidence of asthma at 2 years of age in primary health care. The differential impact in boys and girls indicates that the pathophysiology of asthma is dependent on the sex of the child.

Ongoing research: The longer term efficacy and effectiveness of the intervention will be assessed using data obtained on the targeted risk factors and the presence of parentally-reported allergic disease now that all the participating are over 6 years of age.

The Immunology and Microbiology study in PACT (IMPACT)

The IMPACT study was a nested case-cohort study which was designed to investigate the relationships between microbial colonisation and the development of atopic sensitisation and allergic diseases in childhood.

Background: Intestinal microbiota undergoes substantial development during the first 2 years of life, and is thought to be important for intestinal immunologic development and maturation influencing systemic immune responses.

Objective: Through the use of a prospective study design, the IMPACT study aimed to investigate whether allergen-specific IgE (sIgE) and atopic eczema are associated with variations in gut microbial colonization patterns during the first 2 years of life. This study has been collaboration between the PACT research group at the Norwegian University of Science and Technology (NTNU, Trondheim) and the Norwegian University of Life Sciences (Universitetet for Miljø- og Biovitenskap, UMB, Ås).

Methods: 720 children were included from the control cohort of the main PACT study into the IMPACT study.  Participants consented to cord blood samples at birth, stool samples at multiple time points postpartum until 2 years of age, vaginal bacterial specimens and peripheral venous blood samples from infants at 10 days, 4 months, 1 year and 2 years of age.  A case-cohort study was established which included all 42 sensitised and 52 randomly selected non-sensitised infants who had provided stool samples and attended the clinical follow-up at 2 years.  Faecal samples from these 94 infants, collected at 10 days, 4 months, 1 and 2 years postnatal, were analysed for 12 different bacterial species by quantitative real-time PCR. Venous blood samples from the infants collected at 2 years of age were analysed for sIgE for 12 specific allergens.

Results and conclusions: Temporal and transient variations in gut microbial colonization patterns were associated with differences in sIgE sensitization at 2 years of age. A full understanding of the principles and mechanisms which underlie intestinal microbial colonization and diversity and host–microbiota relationships will be pivotal for the development of therapeutic approaches that manipulate the intestinal microbiota to maintain human health(3).

Ongoing research: The samples collected in the IMPACT study have been used in a number of additional investigations into mother-infant colonization patterns which have been conducted by our collaborators at UMB.  The serum samples taken from participants in the IMPACT study and the ProPACT study (detailed below) will be further analysed to establish the predictive value of allergic sensitisation testing (sIgE and skin prick testing) and the presence and activity of T-regulatory cells in a general population.

The probiotic study in PACT (ProPACT)

The ProPACT study is a placebo-controlled; double blinded randomised control trial of maternal probiotic supplementation during pregnancy and breast feeding with the aim to reduce the cumulative incidence of allergic related disease in infancy.

Background: The hygiene hypothesis, proposed by Strachan in 1989, has been revised, and the role of microbial exposure during infancy in the development of allergic diseases has received particular scientific interest. Randomised controlled trials using various probiotic species and forms of administration have shown partly conflicting results in the prevention of AD and sensitization. Previous reports have suggested that certain probiotics given to mothers and children at risk of atopy halves the incidence of atopic dermatitis (AD) at 2 years of age.

Objectives: We aimed to examine if probiotics given to pregnant women in a general population, i.e. not selected based on their infant being at high risk of allergic disease, could prevent atopic sensitization and or allergic diseases during the child's first 6 years.

Results and conclusions:  At 2 years, 138 and 140 children in the probiotic and the placebo groups, respectively, were assessed. In the ITT analysis, the odds ratio (OR) for the cumulative incidence of AD was 0.51 in the probiotic group compared with the placebo [95% confidence interval (CI) 0.30–0.87; P=0.013]. There were no significant effects on asthma or atopic sensitization.

Probiotics given to non-selected mothers reduced the cumulative incidence of AD, but had no effect on atopic sensitization(4).

Ongoing research: the cumulative incidence and prevalence of allergic diseases of the children at 6 years will be assessed to determine if the effectiveness of maternal probiotic supplementation has a lasting effect beyond 2 years of age.  Additionally, numerous biological sample (including serum, faeces, breast milk and bacterial swabs), are under investigation in order to explore potential underlying biological mechanisms which could explain the protective effect of probiotic bacteria. These investigations are being conducted in collaboration with UMB and the Department of Cancer Research and Molecular Medicine at NTNU. 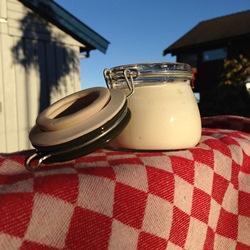